Cunning sea life could be using huge, overlapping swirls of ocean water that overlap in unexpected ways to travel great distances with minimal exertion, marine scientists are suggesting. Eddies, the swirls of water motion, are a well known phenomenon in the ocean, and can range in size up to hundreds of miles in diameter. However, something very interesting happens when they coincide.

That’s what was observed for the first time by researchers at the University of Liverpool. They saw what are being described as “smoke rings” in the Tasman Sea, in the South Atlantic. Using satellite data along with temperature information of the sea surface, they figured out that the unusual visuals were the result of a pair of linked eddies, known as “modons”.

“What we found was a pair of eddies spinning in opposite directions and linked to each other so that they travel together all the way across the Tasman Sea, taking six months to do it,” Chris Hughes, lead author of a study detailing the phenomenon, said of the findings. “Ocean eddies almost always head to the west, but by pairing up they can move to the east and travel ten times as fast as a normal eddy, so they carry water in unusual directions across the ocean.” 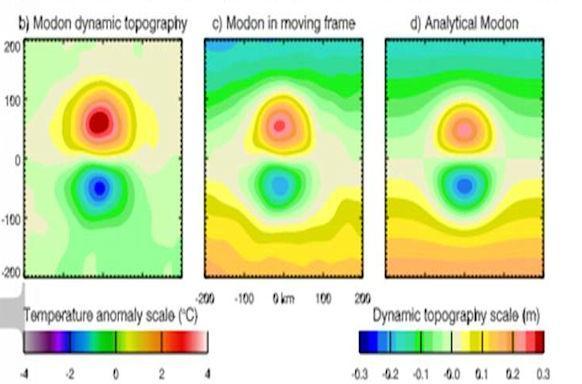 That ability to carry water at high speed could be something marine life is taking advantage of, Hughes and his team suggests. Smaller creatures could be “sucked up” by the contra-rotating eddies and carried long distances across the ocean. “Rapid water transport by long-lasting modon eddy pairs in the southern midlatitude oceans,” the paper Hughes and his colleague Peter Miller authored, explains that each modon could last for around six months before breaking into individual vortices.

Based on their findings, Hughes and Miller identified nine examples of long-lived modon eddy-pairs in various different bodies of water. The morons “represent an unusual pathway for propagation of water with different properties into the open ocean.” For instance, the previously observed spreading of unusually oxygenated and high-saline water from the Bass Strait into other areas of the ocean, which helps balance fish populations, could rely on eddy-pairs for its mobility.

It’s not the first time high-speed movement related to the ocean has caught the attention of scientists. Earlier this year, researchers suggested ocean winds could be a huge source of currently untapped electrical power generation, were we capable of installing and maintaining sufficient wind turbines over large swathes of the seas. One 2m square kilometer wind turbine farm situated in the North Atlantic, they theorized, could potentially generate enough power to satisfy the requirements of both the US and China, with electricity to spare.