[UPDATED] Does T-Mobile have AT&T by the Spectrum?

Could AT&T be on the hook for $3Billion and a chunk of the AWS Spetrum? This little nugget came up in conversation with a friend of mine over the weekend (yes, I talk about wireless telecommunications mergers as part of my social life) and I found some co-corroborating documentation during some searches through AT&T’s website today. Oddly, the link took me off of AT&T’s press website to a protected domain, mobilizeeverything.com. So I’m uncertain whether this is real or not. The first image here shows the link from AT&T’s newsroom that took me to the mobilizeeverything.com website.

This image is the next page that appeared, it looks like a website for AT&T, but isn’t. The whois lookup only took me to a Name.com protected domain. Name.com’s internal whois lookup was equally unhelpful. This is really weird.

This is the final piece that contains the juicy bit. This term is apparently out of a document meant to give investors a clue as to what this merger is going to mean for AT&T’s stock value over the next twelve months. I saved a copy of Factsheet.pdf and took a screenshot. I used GIMP to crop and emphasize the relevant paragraph from a screenshot. If this is true, and the FCC decides to block AT&T’s move, AT&T will not only have to pay T-Mo $3 billion, but will have to cede part of their AWS Spectrum to T-Mo. 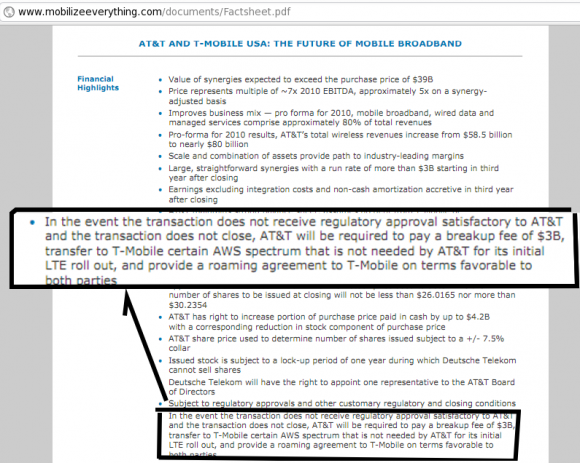 This is going on at the same time when the FCC opposes the merger. Dangerous times for AT&T, they might lose out on this one.

I contacted Michael Balmoris at AT&T. He replied with some clarification as to the source of this information. He said that it was part of an 8-K public filing. An 8-K is a type of report companies have to file with the Securities and Exchange Commission (SEC) whenever they make a big announcement that shareholders have to know about.

That language is from an 8-K that we filed after announcement that provides additional detail on the agreement with DT. Below is the excerpt from the filing – basically the same thing he has and what we included on the fact sheet.

T-Mobile now gets either 3 billion dollars cash and a chunk of the hotly contested EM spectrum rights freshly freed from the grips of broadcast television or annihilation. That’s a step up from wholly consumed into the belly of AT&T’s acquisition.