If you’re heading to the polls today or already have earlier this morning, it’s important that you take the time to be proud of yourself – but not with your smartphone’s camera. Laws across these United States prohibit photography in some locations and polling locations in some states will straight up confiscate your camera-toting device if you pull it out before or after voting. If you’re unsure of your state’s laws regarding photographic equipment, (including, yes, your iPhone), it’s better to just skip it – or just take a photo of your “I Voted” sticker instead.

An awesome website by the name of Citizen Media Law Project shows a chart with all of the laws regarding “Documenting the Vote” with your state listed plainly. In Minnesota we’ve got essentially no laws expressly forbidding cameras or video recording equipment, but “the Office of the Minnesota Secretary of State strongly discourages voters from using cameras or video recorders in the polling place.” 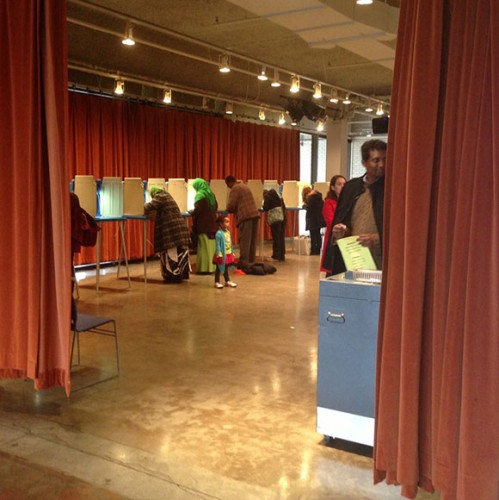 Additionally, “a voter shall not reveal to anyone in the polling place the name of any candidate for whom the voter intends to vote or has voted” is a law on the books here in Minnesota. This could very easily be used against you if you’re photographing your ballot. If you’re thinking about letting everyone know who you’re voting for, please feel free to do so, but don’t do it INSIDE the place where you’re voting.

Interestingly enough, Google is once again encouraging YouTube users to video record their voting experience. Make sure you do so according to your state’s laws regarding recording. Better having voted than having recorded what you’d intended to vote!

Also please feel free to watch the following awesome video that shows the final battle between Barack Obama and Mitt Romney, and let us know if you’re missing your favorite candidate in the video, too! Fiscal Cliff battle – fight!