There are flashlights and then there are FLASHLIGHTS and this DIY 72,000 lumen bad boy is definitely the latter type of flashlight. It was made by a guy called Samm Sheperd and it uses eight 100w LED chips that generate a huge amount of heat when turned on. In fact, the thing generates so much heat that it has to be water-cooled to prevent it from catching fire.

When the builder shines the flashlight into the air it almost looks like a light saber, which it sort of is. The finished product consumes 800w of power and has its own internal radiator, pump and water container. Each of the LED chips produces about 9,000 lumens. The cooling system is made from cheapo eBay computer cooling parts. 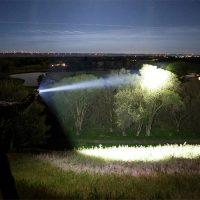 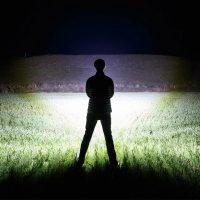 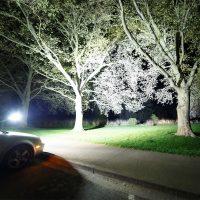 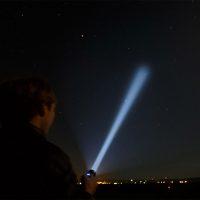 Thermal paste was used on the bottom of each of the LEDs to transfer heat to the aluminum heat exchanger plates on the back of the LEDs. The build did require a breadboard and soldering skills. The LED array was attached to a cheap aluminum and wood frame using epoxy. The coolant reservoir looks to be a simple drink bottle of some sort.

Power for the massive flashlight comes from three lithium-ion battery packs connected in series producing about 36V. The homemade LED flash light is incredibly bright. In the end, the builder decided to go even brighter with three more LEDs on the array to bring it to 1000 lumens of eye-searing brightness. If you ever need to see in the pitch black dark or kill a bird with the sheer power of light, this is your toy.