I owned a fair number of games for the Sega Genesis when I was a kid, but two that will forever stick out are The Lion King and Aladdin. Though I played both games for hours on end, I’ve only ever managed to actually beat just one of them: Aladdin. Aladdin was a game that was difficult enough on its own, but it didn’t hold a candle to the sadistic challenge of The Lion King. I have seen the end of The Lion King, but I didn’t get there through determination and skill. No, I had to use a Game Genie to get infinite lives and invincibility or to skip levels. Despite the amount of time I sunk into that game, I never managed to beat it legitimately.

Luckily for me – this 30-something grown man with a chip on his shoulder because he could never beat a video game back in the day – developer Digital Eclipse and publisher Nighthawk Interactive have brought both Aladdin and The Lion King into the modern era. They’ve done so by way of compilation called Disney Classic Games: Aladdin and The Lion King, which is out today on Nintendo Switch (the version I reviewed), PlayStation 4, Xbox One, and PC, giving me another chance to finally break this game and claim the renown I’m owed.

I still have not beat The Lion King legitimately.

Allow me to start by saying that Disney Classic Games: Aladdin and The Lion King is not for the lily-livered or those who are weak of spirit. If you’re going to buy this compilation, you should know what you’re getting yourself into, because neither The Lion King nor Aladdin are games to be trifled with. The Lion King in particular was Dark Souls before there was Dark Souls – it will chew you up and spit you out and you’ll be left wondering how a game based on a children’s movie came to be so freaking difficult. 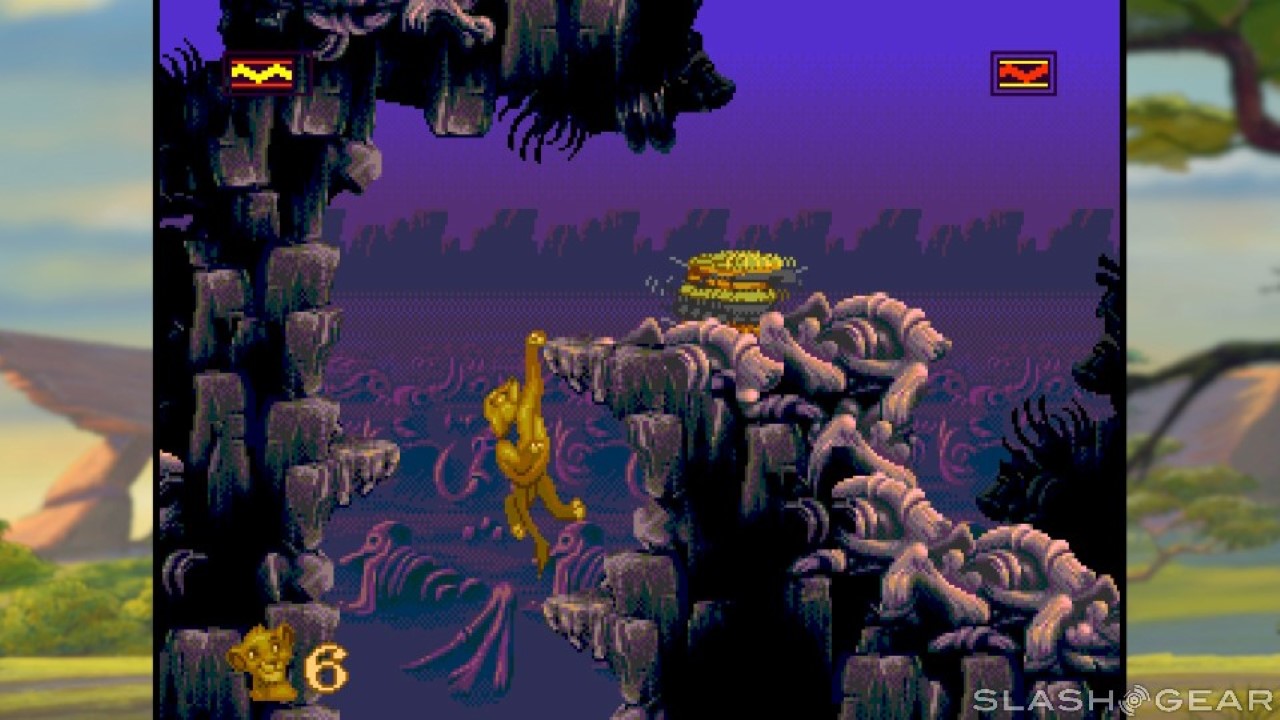 Thankfully, the fact that these games are being re-released today means that we now have new tools for dealing with The Lion King’s difficulty. In both Aladdin and The Lion King, Digital Eclipse has implemented a handy rewind function that allows you to roll back the action when you inevitably bite the dust. It’ll probably still take you a while to overcome the obstacle that forced you to rewind, but the point is that you’ll be able to overcome it without eating through your lives and eventually your continues until you’re left with nothing but shattered dreams and a “Game Over” screen.

Am I guilty of cheating because I abused the rewind button while I was playing through The Lion King for this review? Probably, but I don’t care. It’s done. Simba has returned to Pride Rock, Scar is dead, and the circle of life can begin anew. 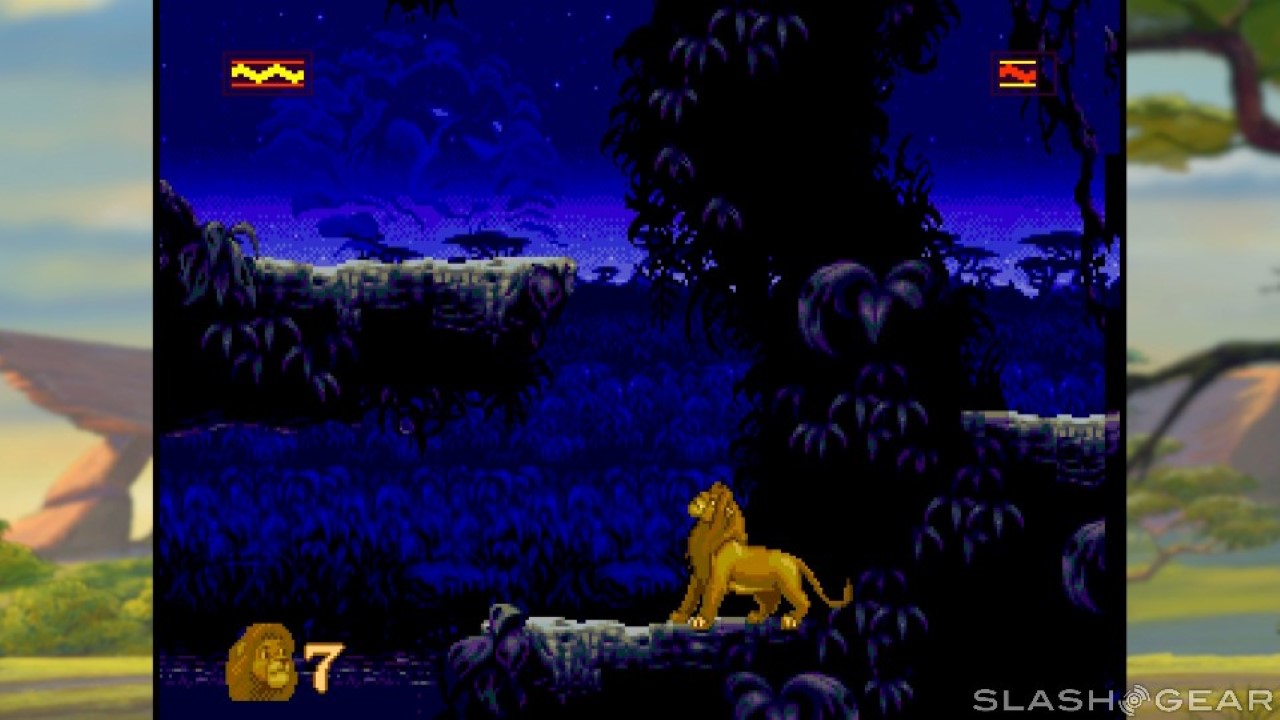 In truth, it’s really only the first half of The Lion King where the difficulty is a real problem. Since the game follows the progression of the movie somewhat closely, you’ll spend the first half of the game as young Simba and the second half of the game as adult Simba. Adult Simba can do all sorts of cool things, like swipe his paws at enemies to damage them. He can also pounce on enemies and maul them or even throw them across the screen if you get your timing right.

Young Simba can do none of that. Young Simba can bounce on enemies and growl at them to freeze some small ones – like bugs and lizards – in place momentarily. To put a finer point on it, young Simba is one of the most worthless video game protagonists I’ve ever played as. Once you become adult Simba, it’s easier to survive the challenges this game throws at you, but until that happens, you need to be on your game or else you’re going to get smacked down.

It isn’t just enemies that you’ll have to deal with, as The Lion King has a number of tricky platforming segments that require precise input to successfully complete. For most people, that sentence will elicit flashbacks of the game’s second level – Can’t Wait to Be King – where you’re bouncing off rhinos, performing quick jumps off the heads of giraffes, dodging obstacles while riding on the backs of ostriches, and figuring out puzzles that involve being hurled across the screen by monkeys. 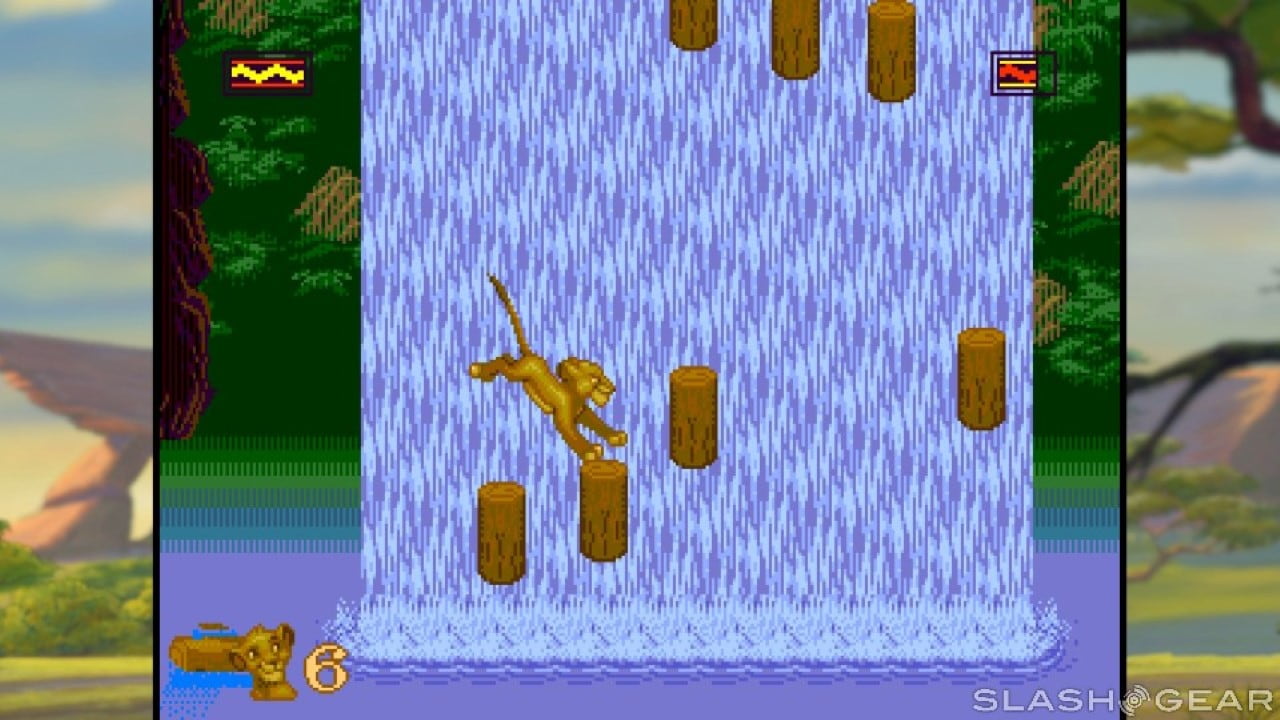 While that level may be the one that scarred children back in the ‘90s, every stage in The Lion King serves up one platforming challenge after another. I don’t mind these, and when you pull off one of these segments perfectly, it feels like a huge accomplishment. I’m sure if you could finish this game without ever touching rewind, that would feel like a huge accomplishment too, but alas, such a feeling is something that eludes me.

It might sound like I hate The Lion King, but I actually don’t. While the difficulty is definitely frustrating, I still really like it on the whole. It looks great for a 25-year-old (!) game and the soundtrack is fantastic too. I’m a big fan of all of the adult Simba levels, and even some portions of the young Simba levels, particularly when the challenge is slanted more toward platforming than it is enemy spam.

Even if you aren’t the biggest fan of The Lion King, it’s only one part of this compilation. Aladdin, in my opinion, is the real reason to buy Disney Classic Games, as I truly believe it’s one of the best games ever made for the Sega Genesis. It isn’t perfect, mind you, but it’s pretty darn close. 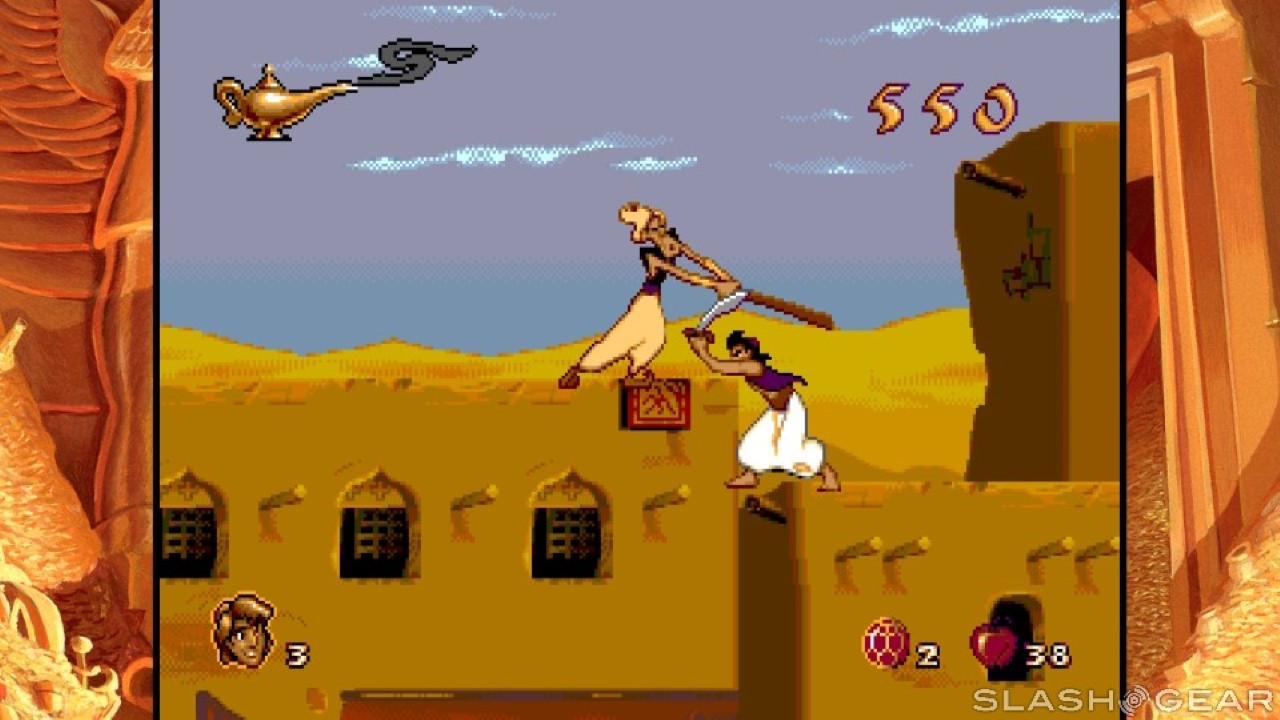 Aladdin has a reputation for being difficult as well, but I don’t think it’s quite as hard as The Lion King. In my mind, Aladdin strikes a better difficulty balance in both combat and platforming, and while you’ll still be hitting the rewind button to undo some mistakes, I think you’ll be doing it far less often than in The Lion King.

Difficulty debates aside, Aladdin is a gem of a game. Every stage is well-crafted, the graphics are beautiful, the music is excellent, and the gameplay is engaging. This game has it all – you can throw apples at enemies to make their pants fall down, you can sword fight with others, you can buy extra lives and continues from street peddlers, and you’ll even spend some time outrunning boulders like you’re Indiana Jones. If you’ve never played Aladdin before, I’d be tempted to argue that it alone is worth the price of Disney Classic Games.

I don’t need to make that determination, though, because this compilation has been packed with extras. You get both the SNES and Genesis versions of The Lion King, along with the Game Boy (complete with a Super Game Boy mode) and Japanese versions of the game. For Aladdin, you’ll get the Genesis, Game Boy, Super Game Boy, and Japanese versions, but you’ll also get a new “Final Cut” version of the original game. I spent most of my time playing the Final Cut version, and while the changes from the original aren’t obvious, it does fix some bugs and add some secret areas to a number of levels. 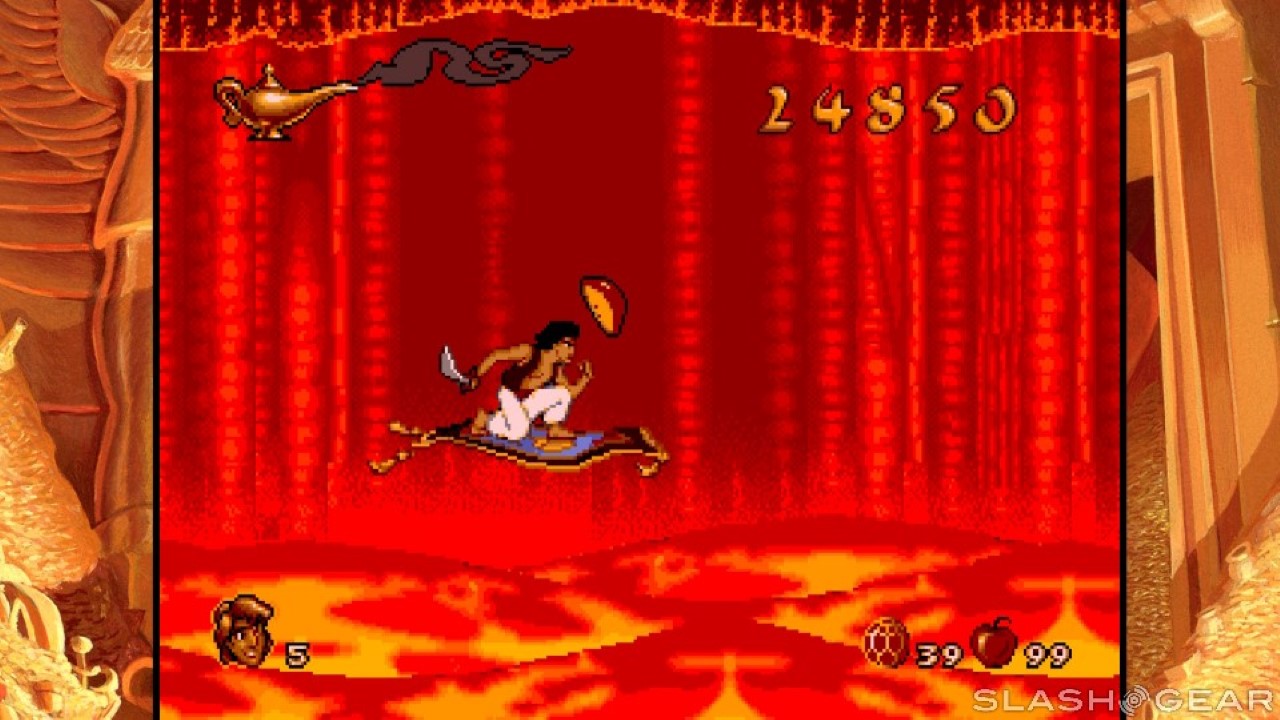 In addition to all of that, you also get a demo for Aladdin that first debuted at a trade show in Chicago in 1993. While I don’t expect many people will spend a significant amount of time playing it, it does offer an interesting look at how the game changed between that demo’s release and the launch of the finished product. Some of the art assets are unfinished, while others were changed in the release version. Some parts have no music at all, and there were some platforming mechanics present in the demo that didn’t make it into the finished game. If you pick up this compilation, definitely check that out. 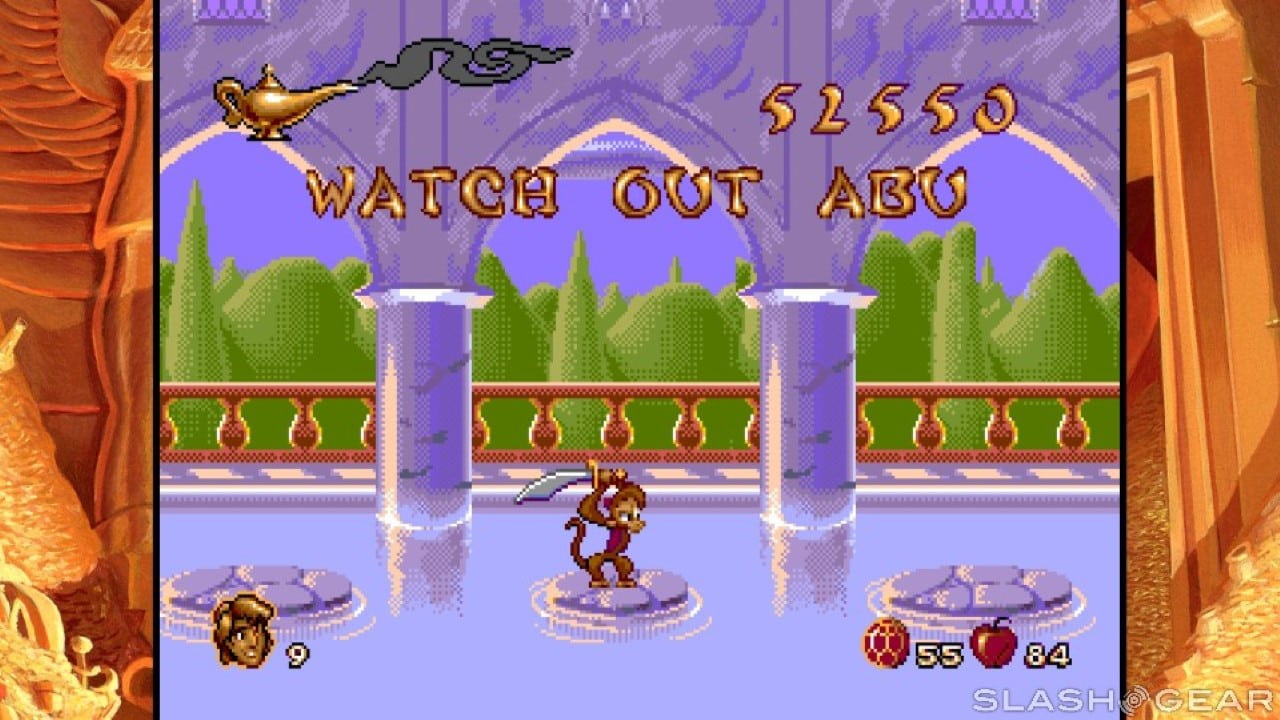 It’s a real shame that the SNES version of Aladdin isn’t here, because I’ve never actually played that one before. I would have loved the chance to finally check it out, but I’m assuming that fact that it’s missing is something that was out of Nighthawk’s controls.

Even without the SNES version of Aladdin, there’s a lot of content here. I assume that most people will skip the Game Boy versions of both Aladdin and The Lion King, as they don’t really offer much with the console versions present. For those who played and enjoyed the Game Boy titles as a kid, I can see why it would be fun to revisit them, but they aren’t really my cup of tea. 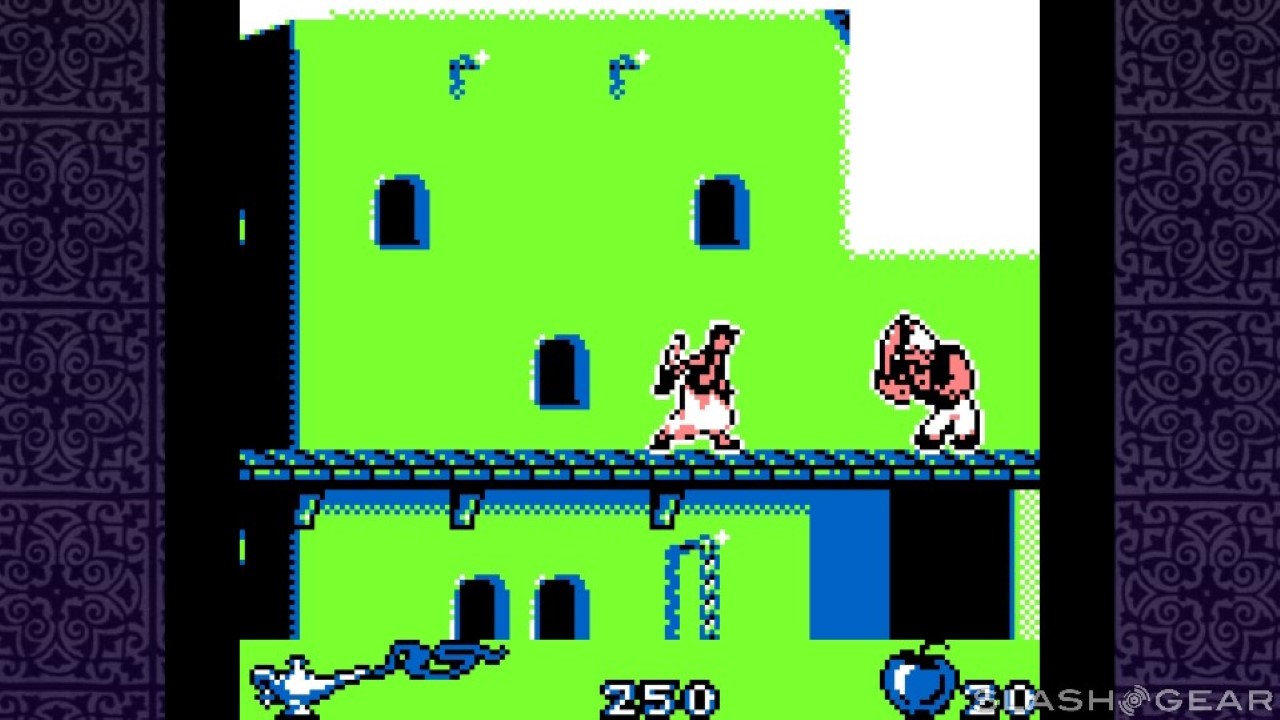 Some of the games in this compilation offer pre-recorded playthroughs that allow you to start off watching and jump in at any point. So, if there’s a particularly tricky part of a game that you can’t complete, you could potentially queue up the pre-recorded playthrough and then wait until it progresses past your problem point before jumping in. These playthroughs could also be a good way to learn about any secrets you’re missing without having to put the game down and visit YouTube or a guide online.

These games all look great on an HD TV, but if you’re playing on Switch, Disney Classic Games makes for a perfect handheld title. As with a lot of retro re-releases these days, you can apply various filters to the visuals, for instance adding scanlines so it feels like you’re playing on an old school CRT TV. All of the games in the compilation also support save states, which means you’re not stuck trying to complete these titles in one sitting. 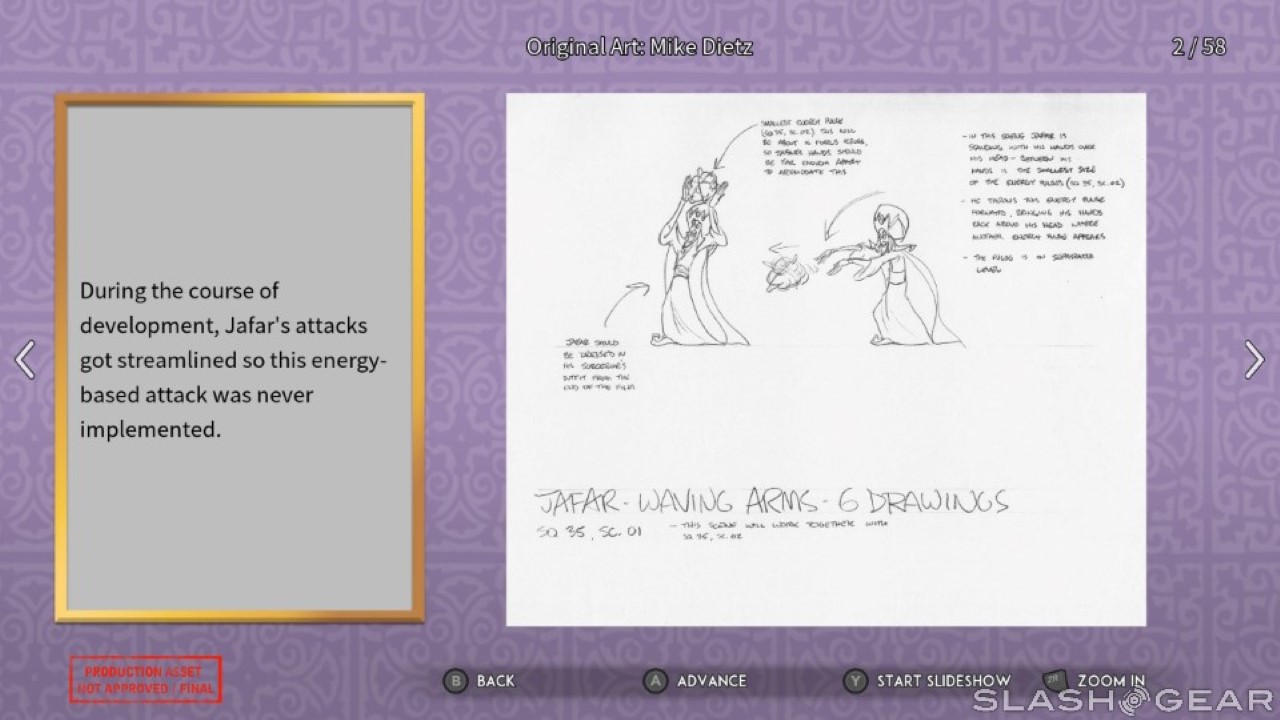 Along with the games comes with a truly impressive amount of additional content. Both games feature a “Museum” packed with making-of videos and concept art from the games and movies. There’s a lot to dig into here, and the Museum offers a glimpse behind the scenes to see how these games were made. Interestingly, Aladdin seems to have more bonus content than The Lion King does, but there’s still plenty there for both titles. Toss in soundtracks for The Lion King and Aladdin, and we have a really beefy compilation on our hands.

If you’re going to release a compilation of retro titles, something like Disney Classic Games is the way you do it. What easily could have been a barebones money-grab that played on nostalgia for the good old days is instead something that offers a lot for the price, even if it doesn’t take you very long to tear through each game. In the end, Disney Classic Games feels like a celebration of Aladdin and The Lion King rather than just a mere re-release, with plenty of extra content to dig into for people who really love these games.

Even though The Lion King is guilty of being brutal, that’s just the way games were in the 1990s, when there was more of a focus on challenge than progression. Adding rewind and pre-recorded playthroughs is a decent way of dealing with that difficulty though, and those features make The Lion King in particular much more accessible to players who would otherwise drop it a few levels in. 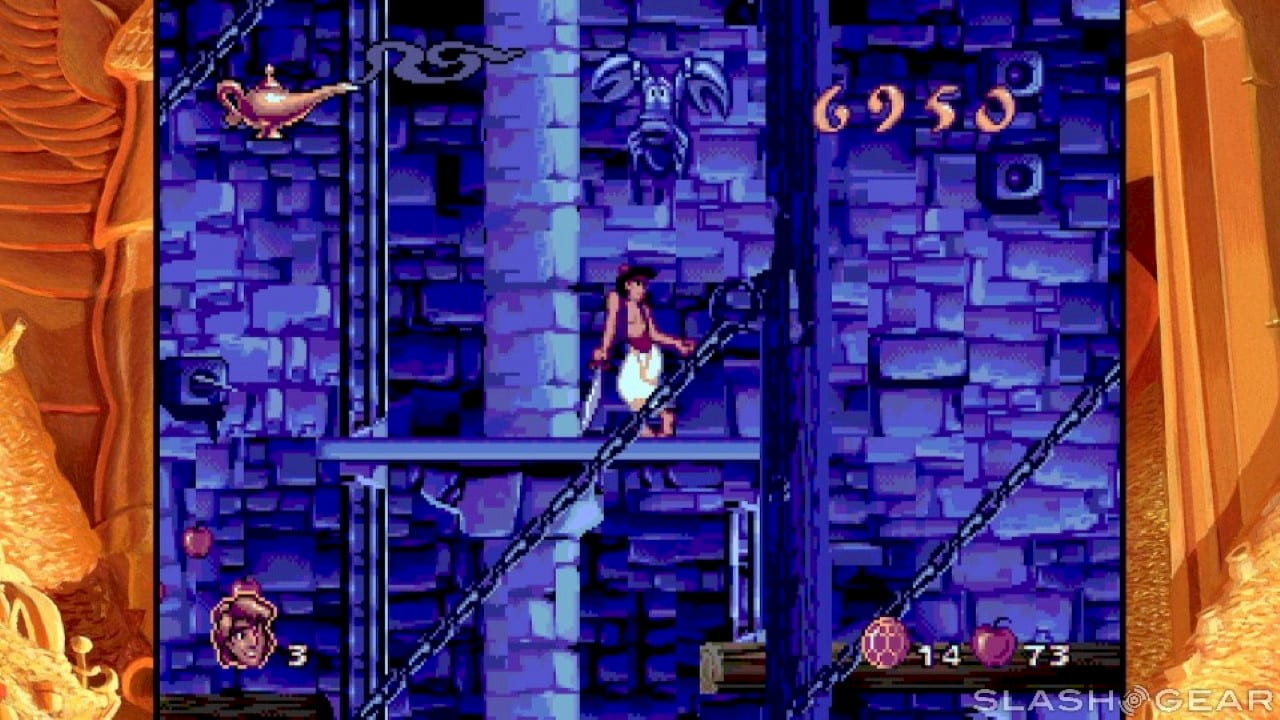 I’ve already made my adoration for Aladdin clear elsewhere in this review, but I will say once again that it’s the primary reason why I was interested in this compilation and it’s just as good as I remember it. While I’m probably done with The Lion King after one expletive-filled playthrough, I can see myself returning to Aladdin every so often because it’s just a really good game.