Disney Beachbot draws in the sand

This cute little robot looks like a turtle with a big orange shell and it is designed to do something fun at the beach. The Beachbot is designed to draw large scale art in the sand as it rolls around under its own power. The robot was designed by a team from ETH Zurich and the Zurich division of Disney Research.

The robot rolls around and draws in the sand using a rake attached under its body. The bot is able to control the pressure on that rake to make marks in the sand. The biggest challenge for the team was figuring out how to translate the pictures they want the robot to draw in the sand into something the robot could understand. 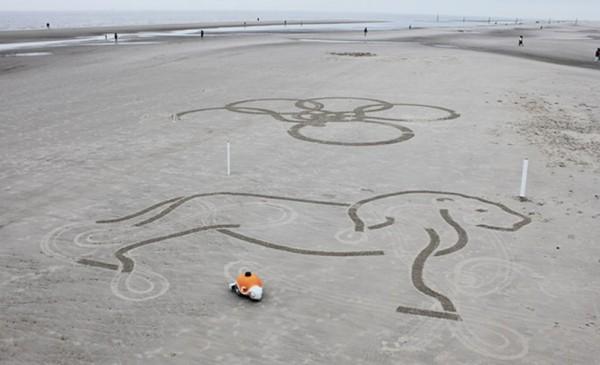 To do this the researchers developed an algorithm that can turn images into trajectories that the robot can work with. The algorithm isn’t perfect just yet, the team still has to tweak the Beachbot’s work manually when it works on a large project.

For the robot to work the team places four poles around a 10-meter square area to tell the turtle where to draw. A laser scanner built into Beachbot and it’s on board computer can detect the poles and recognize the area inside as the place to draw.