Discord Threads are the new home for off-topic conversations

Back in May, Discord launched a brand refresh of sorts that not only saw the company roll out a new logo and color scheme, but also new features. At the time, Discord said that chat threads – one of its most-requested features – would be arriving later in the summer. Fast forward to today, and it looks like the big launch is here, as Discord has rolled out Threads in a new update.

Discord Threads can best be described as breakout chats that can help server moderators and users stop off-topic conversations from taking over. While Discord servers allow you to create a bunch of different rooms based on any topic you want, it doesn’t take much for off-topic conversations or debates to derail the conversation, especially in larger servers. The solution to this problem is Threads. 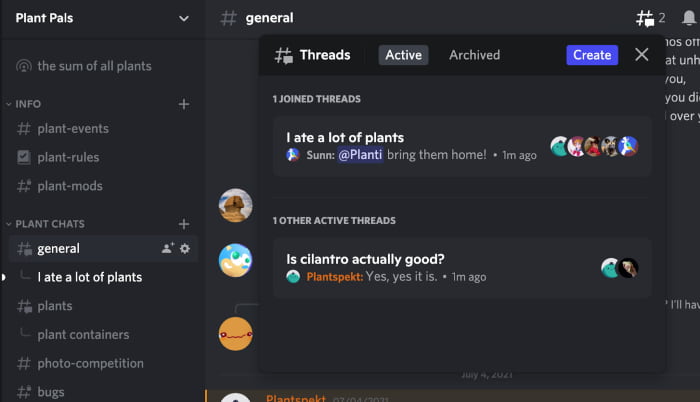 As explained on the Discord Blog, Threads can be posted as sub-rooms attached to a chat channel. This splits off the conversation into a separate feed that allows on-topic conversation to continue as normal in the main channel. Threads can be created by highlighting a message and selecting the “#” shortcut that pops up, but they can also be created without a message prompt by selecting the “+” next to the chat bar at the bottom of a channel. Opening a Thread will create a split-screen view that includes both the Thread and the main channel it belongs to.

Discord says that Threads will be archived after a certain period of inactivity, which is set to 24 hours by default. Boosting a server to level 2 will allow users to create private threads, which won’t be visible to any other members other than the participants. However, new users can be added manually or by pinging them from the Thread. This will allow users to essentially create private group DMs without adding every other user as a friend first. Level 2 servers can also extend the inactive period before a thread is archived up to one week.

Moderators will also be able to set permissions concerning who is allowed to create threads, use private threads, and manage threads, and once they’ve been updated, bots will have all the same capabilities in Threads that they do in normal chats. Threads are launching today on Windows, macOS, Linux, iOS, Android, and web app. For now, Threads will be an opt-in feature for Community servers, but only until August 17th, when they’ll go live for all servers regardless of status.