The competition between Steam and Discord is heating up. Back in July, Steam rolled out a new chat client that appeared to take heavy inspiration from Discord, and today, Discord is biting back by going after Steam’s core business of selling games. Yes, Discord has launched a game store of its own, and though it’s starting small, it has the potential to become a big part of the app as a whole.

In truth, we probably should have seen this coming when Discord rolled out its Games Tab back in June. With that update, the Games Tab became the first thing you saw when you opened the app, surfacing news articles about the games you’ve recently played, allowing you to launch some games right from Discord, and just generally keeping you up-to-date about the games that are popular in your circle of friends. Pivoting from the Games Tab to a storefront seems like a logical step, though it sounds like Discord won’t run things like Valve has with Steam. 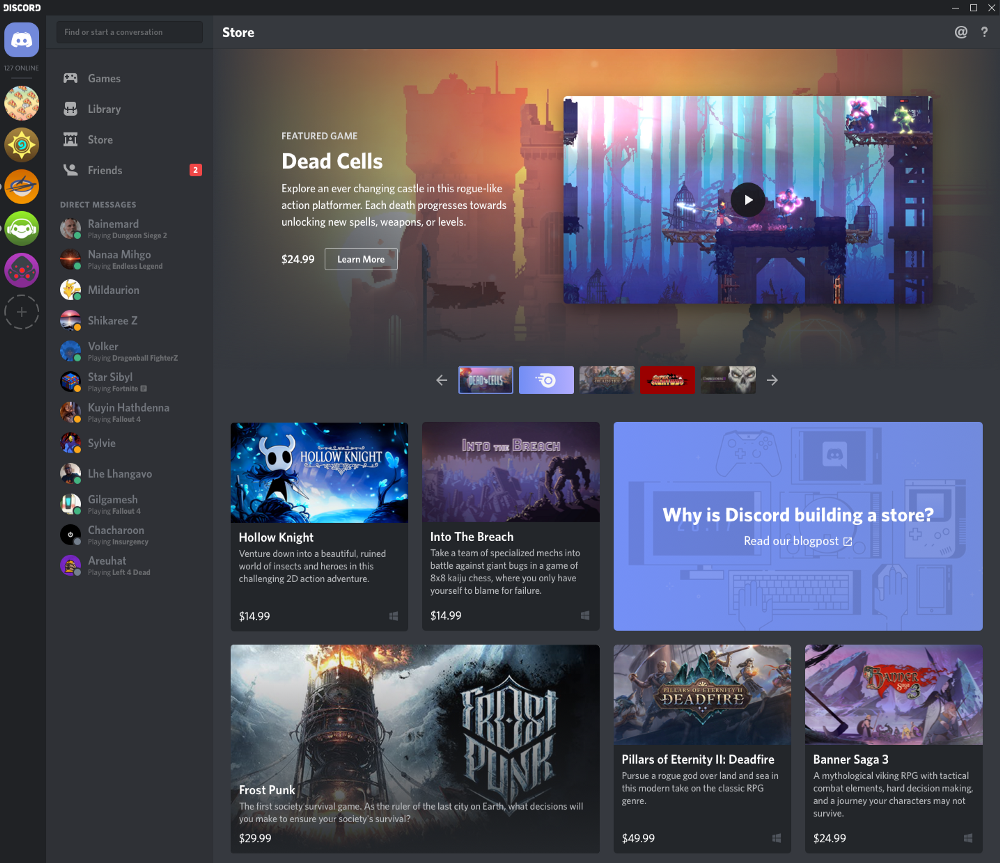 To hear Discord explain the new store over on its blog, it sounds like this isn’t going to be a repository for any and every PC game like Steam is. Instead, Discord plans to curate the game store itself, recommending titles to users instead of simply letting any listing go live. “We’ll be showcasing a variety of titles that we think you’ll like,” Discord writes. “As the store grows, we’ll rely on our community and our team to make the store feel super personal and focused on games that we genuinely think you’ll enjoy!”

As you can see, the list features older, triple-A games and indie titles, so there isn’t anything brand new on that list. Still, like Twitch Prime, these games are a nice little perk for those who already have a Nitro subscription. The store, meanwhile, will launch offering the 11 games listed below:

We can expect that list to grow over time, but it seems clear that Discord is looking to carry high-quality indie games on its store and not much of anything else. Once the store leaves beta at some point in the future, we’ll also see some indie titles arrive “First on Discord.” These will be timed exclusivity deals that usually last for 90 days before developers can offer them through other platforms.

Discord is also launching a universal library that will scan your computer for games and allow you to launch them from within the Discord app. You’ll be able to start your games through Discord even if they require another launcher, as Discord will simply open the required launcher as well.

This is a pretty massive update for Discord, but the company assures that text and voice chat will still be its primary focus moving forward. Don’t be alarmed if you’re not seeing Discord’s new store or Nitro perks right away, as the beta test is only open to 50,000 randomly selected Nitro users in Canada. Hopefully the beta extends to more users before long, and we’ll be sure to update you when it does.