Players of the fastest selling PC game in history Diablo III will be glad to find this week that Blizzard, the creator of the game, has added an upgrade that allows characters to level up past 60. This limit on the game has existed since the game’s introduction and now it’ll be dashed apart with a feature called the Paragon system. This new system has you able to move past your initial 60 levels and into a whole new set of 100 levels that bring on Magic Find and Gold Find that stick to you like stats, and you’ll get a whole lot more shiny in groups as well.

This system allows players to progress past level 60 and is what Blizzard hopes will be a way for people to stay interested in one character rather than having to start over constantly when they’re bored with their top-level hero. Blizzard describes the Paragon system with the following set of bonuses:

• After you hit level 60, any further experience you earn from killing monsters will begin to count toward Paragon levels.
• There are 100 Paragon levels

— Every Paragon level will reward you with:
• Core stats such as Strength, Dexterity, Intelligence, and Vitality in amounts similar to what you’d gain from a normal level
• 3% Magic Find and 3% Gold Find

• In addition, a distinctive increasingly-impressive border will surround your character portrait in the in-game party frame to denote your Paragon progression, with a new frame earned after every ten levels. Your Paragon level will also be visible to other players wherever your normal level is shown.

This upgrade also changes the game to include a 300% cap on Magic Find and Gold Find. When you reach level 100 in Paragon, you’ll no longer need Magic Find or Gold Find gear because your character will be maxed out no matter what. Nephalem Valor, a system which gives level 60 characters incentive to fight multiple enemies in the same game rather than leaving a game to create a new game to fight that same monster. With the Paragon system in place, NV also adds 15% to your experience gain to level up inside the Paragon system. 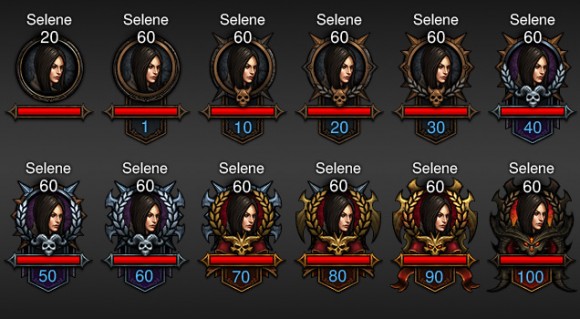 So head on out and start leveling up 100 more levels, all you Diablo III addicts! Then wait a few more months and perhaps there’ll be more levels still, with another different title besides!

Be sure to check out the diverse timeline of Diablo III news bits and columns below, and let us know if you’re playing the game right now!