This week Blizzard will be bringing “thousands” of Diablo III hackers, botters, and cheaters to the banning chambers as they ramp up their efforts to keep the game a completely clean, safe, and enjoyable environment for all players. This wave of cuts is sure to create some controversy as there is currently no offline play mode for the game, even if a player wants to play by his or herself – because of this, no hacks will be tolerated anywhere in the game at any time.

While in past versions of Diablo, players were able to hack the game all they wanted, just so long as they were playing single-player offline, here in Diablo III there’s no such leniency. Blizzard has announced that they’ve already banned or suspended the accounts of thousands of players “for cheating and/or using botting or hacking programs while playing.” Creating a bot, for those of you that do not know, essentially means having your computer play for you – that’s just not fair, right?

“In addition to undermining the spirit of fair play that’s essential to everyone’s enjoyment of the game, botting, hacking, and other such exploitive behavior can contribute to stability and performance issues with the Battle.net service. As always, maintaining a stable, safe, and fun online-gaming experience for legitimate players is a top priority for us, and we’ll be continuing to keep watch on Battle.net and take action as needed.” – Blizzard Entertainment 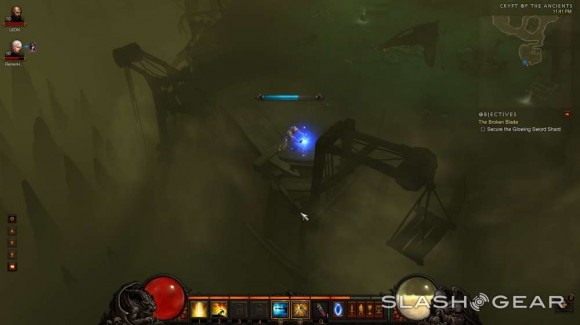 So beware all you non-traditional players out there, Blizzard isn’t going to have it! No duped SOJs, no massively unbalanced sets of cracked boots, and certainly no in-town kills. This isn’t World of Warcraft in South Park, after all. Stay tuned to see how this all plays out as Diablo III’s universe of online players continues to grow!