The folks at Blizzard and their servers at Battle.NET are currently hard at work to fix any and all issued that have arisen here on launch week for Diablo III, so says their brand new apology for fans posted today. This game has been in the works for more than 10 years and has had so many beta tests going on for months now that its nearly unfathomable that any issues might still exist in the codes of the game and the servers it exists on, but such is life: there’s no real test better than thousands of real players jumping in on the game in the first real final launch.

In the apology launched today, Blizzard Entertainment speaks up via their Battle.NET community manager Bashlok who lets us know that they’re more than willing to help you as an individual as much as they can: “Please visit the Battle.net Support site or Support forums for the latest service-related updates or for help in troubleshooting any technical issues you may be having downloading, installing, or while playing the game.” That said, fixes are in the works for any outstanding issues though “As of late last night, specifically 11:50 PM PDT on May 15, all systems have been online and running relatively smoothly.” 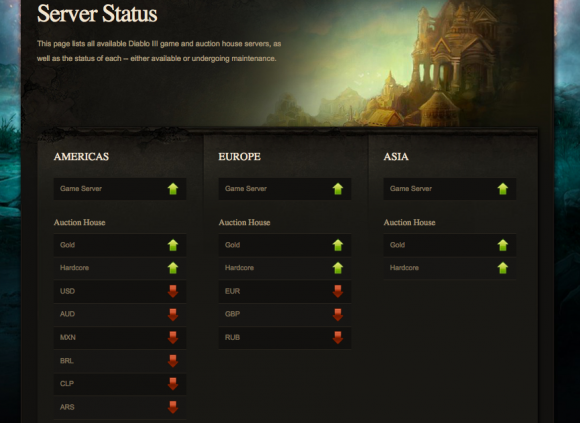 Bashlok was very clear about how this all affects the one element we do not yet have for the Diablo III universe: the real-money auction house. The launch of this auction house was supposed to originally take place on the 22nd of May, this inside the first week of launching the full game, but this date h as now been pushed back with “further updates on that in the near future” Blizzard assures us.

Bashlok continued by noting their methods and future methods as well for error-bashing:

“We’d like to extend a very sincere thank you to everyone who joined the global Diablo III launch celebrations this week, as well as to everyone who was ready to jump into Sanctuary the moment the game went live.

To that end, we’d also like to say that we’ve been humbled by your enthusiasm — and we sincerely regret that your crusade to bring down the Lord of Terror was thwarted not by mobs of demons, but by mortal infrastructure. As many of you are aware, technical issues occurring within hours after the game’s launch led to players experiencing error messages and difficulty logging in. These issues cropped up again last night for the Americas and Europe servers. Despite very aggressive projections, our preparations for the launch of the game did not go far enough. …

Aside from the tremendous number of players simultaneously logging in to the game, one of the launch-day service issues was linked to the achievement system. Some players began to notice early on that achievements were either not being earned properly, or not being saved between multiple logins. We’re investigating this issue and will provide a specific update as soon as possible. …

Thank you again for your patience while we reinforce the gates of Sanctuary and further strengthen it for your onslaught.

Join us this week as we continue to fight the forces of evil by mentioning your handle below – SlashGear will be bashing the minions of evil all weekend long and into the future as well, let’s team up!