The results of a survey of 250 working developers suggest that though more developers are actively creating apps for Android, they also have serious concerns about the platform. The survey was conducted by Baird’s William Powers, and released Monday. Among the concerns are device fragmentation, store fragmentation, app visibility, and the ability to get paid. Our own Ben Bajarin has had similar concerns, especially about the security of apps on Android. Continue after the break for more details.

Device fragmentation: 56% of Android developers, an increase over the past three months, voiced concern that operating system fragmentation among the different Android devices was a significant or “huge” problem.
Store fragmentation: “Generally,” Baird reports, “developers seem to prefer a unified, single store experience like Apple’s App Store.”
Ease of development: iOS lead Android for ease of development, but the two leading operating systems were deemed much easier to develop for than Research in Motion’s BlackBerry OS or Nokia’s Symbian (no word on thoughts about Windows Phone).
App visibility: Developers are concerned about the amount of junk apps in the Android ecosystem. iOS had better marks, since Apple’s App Store is much more tightly controlled. Blackberry came in second, and Android got a poor rating in this category.
Ability to get paid: iOS was at the top, followed by BlackBerry. 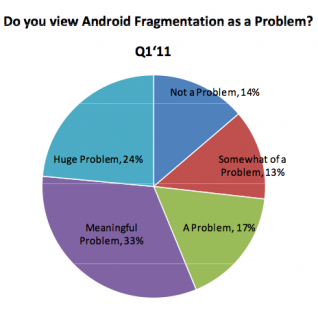 Google has been making a push against fragmentation, and moving to limit what manufacturers can do to change the OS. It remains to be seen if this will give developers (and users) a more consistent and predictable experience with the platform.
[via Fortune]