Destiny update 1.1.2 will include colorblind mode

Bungie has detailed its upcoming 1.1.2 update for Destiny, and among the planned changes is the addition of a Colorblind Mode which, as it suggests, is a mode the changes the color profile so that the game is more playable for those with colorblindness. It’s not the first game to add such a mode, of course, but it is an important addition given how often color is used to indicate things about weapons or players that is lost in translation for those who can’t see it. Joining the colorblind mode will be some changes to the audio options, as well.

As far as the audio changes go, Bungie’s Head of Audio Jay Weinland said that “We’ve put a lot of thought into the best way to answer player feedback when it comes to audio.” One of the things gamers want is to be able to “isolate the frequency” of other people on one’s Fireteam, and that means turning them up above the other noise. Such a function will be possible with the update, as well as an option for muting Destiny’s music so that gamers can listen to their own. 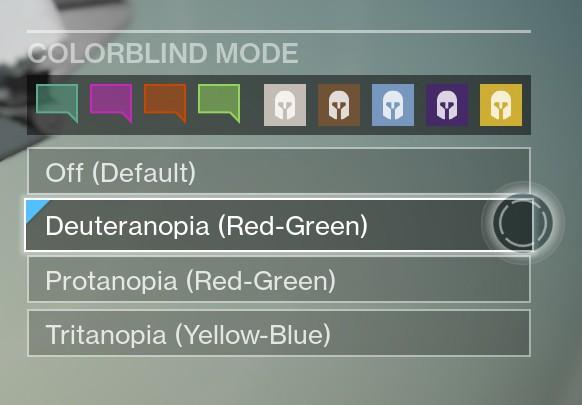 Arguably more important, however, will be the addition of a colorblind mode, which will use contrast among other things to differentiate between items rather than different hues. So, for example, if someone who is colorblind is currently only able to perceive an element as being blue when it is in fact two different colors, the change will present those colors as lighter and darker varieties of blue, making it possible to perceive the differences.

Said Bungie’s David Candland, “We took a lot of care to make sure our game shipped colorblind-friendly, but these settings will make things even easier for our colorblind friends. While the colorblind options may make the HUD look wonderfully colorful to many of us, colorblind players will gain a more distinct clarity, helping their environmental awareness – as well as helping them avoid that unintentional exotic dismantle.”