We have been reporting on Twitter’s efforts to put a lid on “non-official” Twitter clients, like TweetDeck and UberTwitter (now UberSocial). Last week, Twitter’s Ryan Sarver claimed that, according to Twitter’s data, “90% of active Twitter users use official Twitter apps on a monthly basis.” “Official” mean applications that Twitter owns and operates. This data seems to clash with findings in previous studies by Sysomos, that there were significantly more Twitter users using “non-official” sites and apps.

The difference in data seems to come down to spin. Ryan Sarver saying that 90% of active Tweeps use official apps on a monthly basis does not account for how many actual tweets are being sent out, and from where. Even those who mostly use TweetDeck, or other clients probably still use the official Twitter site occasionally, monthly even. 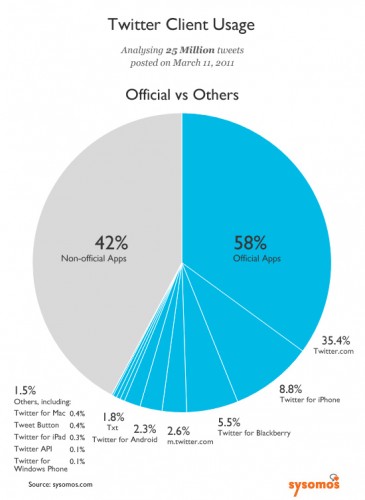 Sysomos reviewed a sample of 25 million tweets on March 11 (the day Twitter unveiled its new API policy). Their data shows that 42% of tweets were made by non-official apps, which is more than four times the amount claimed by Twitter. Twitter’s official app accounts for 58% of tweets. The most popular apps were TweetDeck, UberSocial, and Echofone. Twitter had focused on total number of users in their analysis, which could prove misleading. There are many Twitter “active” users who are not tweeting very much. The more enthusiastic the Twitter user is, the more likely it is that they are using a non-official service. 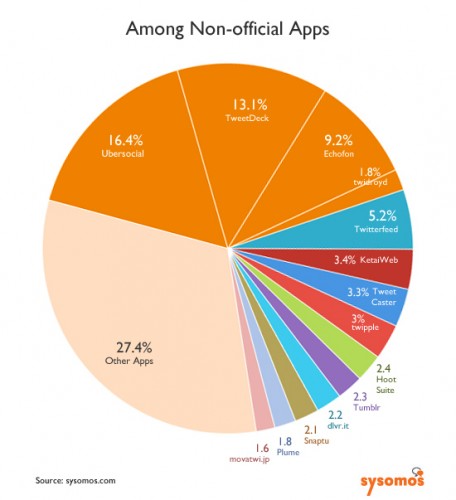 According to Sysomos: “Our June 2009 study showed that 55% tweets were made using non-offical apps, and the number now stands at 42%. With Twitter’s introduction of official mobile apps, acquisition of Tweetie, and redesign of Twitter.com, the market share of official apps is indeed growing, albeit slowly.” Twitter’s efforts in this seem counterproductive and likely to cause resentment among users. What do you like to use when you tweet?
[via Sysmos Blog]