2020 will definitely be remembered for the drastic, sometimes very negative, changes that happened due to the COVID-19 pandemic. It has affected all quarters and industries around the world, though not all in the same way. The PC market, for example, has found a bit of reprieve after years of slumping sales and profits. But while PC shipments have gone up, not all categories enjoy that same growth and the computers normally associated with the term “PC” are actually still in the red, perhaps even more than before.

To be fair, it’s really no longer easy to categorize PCs today. The term has been applied to more than just desktops and laptops running Windows or macOS and now embrace form factors like convertibles and detachables, not to mention operating systems like Android, iPadOS, and Chrome OS. Putting all of this into consideration, market analysis firm Canalys paints a relatively positive picture for the PC market in general, except for traditional desktops.

The PC market grew by 22.7% in the third quarter of 2020 compared to the same period last year. Despite that, the more stationary forms of PCs sank by as much as 27% for workstations and 33% for towers and smaller desktops. Laptops and convertibles did see some positive figures but what carried the industry forward this year were tablets, detachables, and Chromebooks.

The slate tablet market grew by 43.3%, with Apple still taking the lead despite Samsung’s impressive 80% leap. The real winners, however, are Chromebooks, whose shipments grew by 122% in the past four quarters. Among the Chromebook manufacturers, HP has the bulk at 34.1% while Lenovo, the largest PC maker, is a far second at 18.9%. 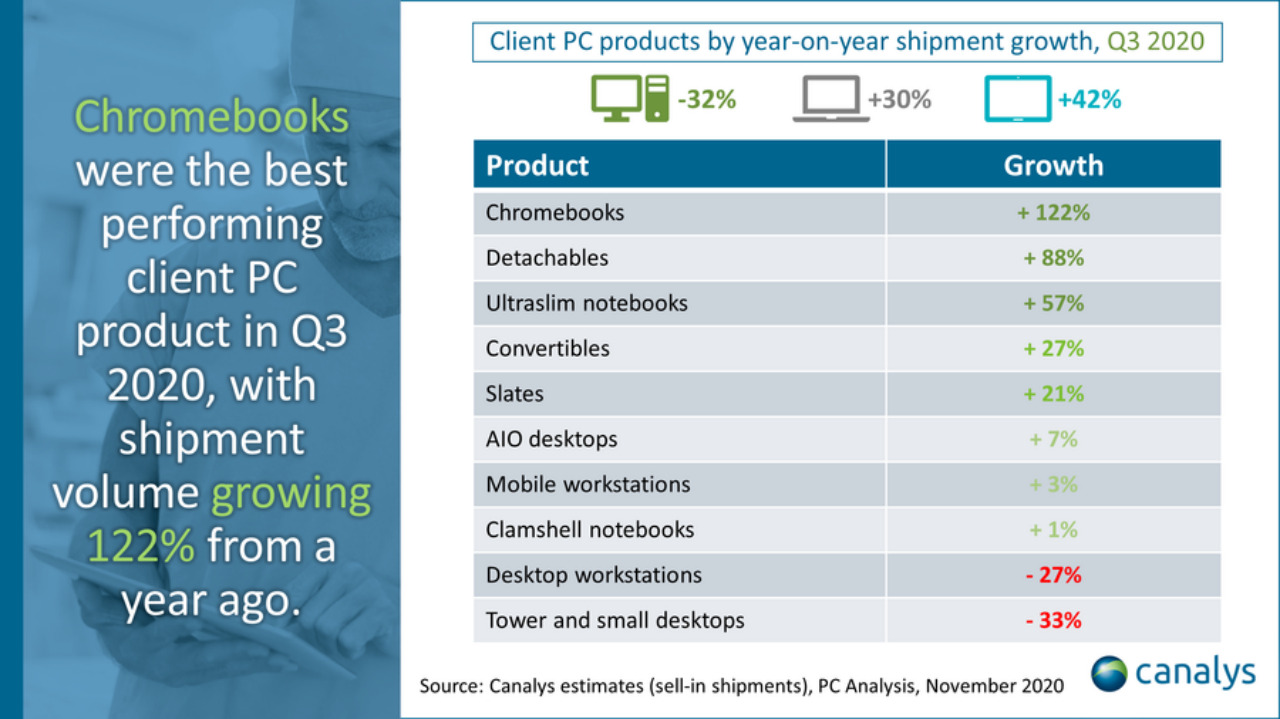 It’s not really that hard to understand this year’s market dynamics when it comes to PCs. As the world moves towards hybrid or remote work and school arrangements, more mobile computers like notebooks and tablets have become en vogue. Chromebooks have also become even more favored in educational settings because of their price value, an important consideration given the uncertain future that the world now faces.