There’s more than one way to get to Las Vegas from downtown Los Angeles. You could hop on a jet at LAX and be there before you’re half-way through your in-flight movie. There’s always I-15, that shimmering ribbon of sun-baked asphalt that takes you through Barstow and Baker before spitting you out across the Nevada line within spitting distance of Sin City. Then there’s the road less traveled – where’s there’s not really any road at all – that runs you through the network of casually-maintained desert paths frequented by utility companies, park rangers, rattlesnakes, and in my case, a pack of brand-new 2017 Toyota TRD Off-Road and TRD Pro pickups.

My final destination was also suitably unbound by the niceties of modern infrastructure, or indeed, pavement of any kind: Primm, Nevada, for the running of the Mint 400. Still advertised as the ‘Great American Off-Road Race,’ the Mint has been an on-again, off-again staple of the off-road scene since it was first staged at its original starting point, the Mint Hotel in downtown Vegas in 1967.

You might be familiar with the Mint 400 for another reason – Hunter S. Thompson famously called out the race in his book ‘Fear and Loathing in Las Vegas,’ as being ‘a far, far better thing than the Super Bowl, the Kentucky Derby, and the Lower Oakland Roller Derby Finals all rolled into one.’ I can’t say for certain whether that ringing endorsement is what led Toyota to bring BJ Baldwin’s factory-backed Monster Energy Trophy Truck to the 2017 running of the Mint, but one can never discount the power of pop culture – especially at an event that has attracted stars as diverse as Steve McQueen, James Garner, and Jay Leno (a class-winner at this year’s running) on the entries list.

Despite the extreme differences between Baldwin’s Trophy Truck – an 800 horsepower, radically-suspended, tough-as-nails racer – and the showroom-spec TRD Off-Road and TRD Pro Tacomas and Tundras that made up our small desert caravan, Toyota was certainly not wrong to link the mission statement of these distinct vehicles together. The Japanese brand has been serious about climbing every mountain and fording every stream since the early 80s when their driver ‘Ironman’ Ivan Stewart was dominating the Baja 500 and Baja 1000 long-distance races. That spirit continues on today with the TRD line-up of increasingly-hardcore rock crawlers and dune runners, giving the automaker a special place in the off-road community. 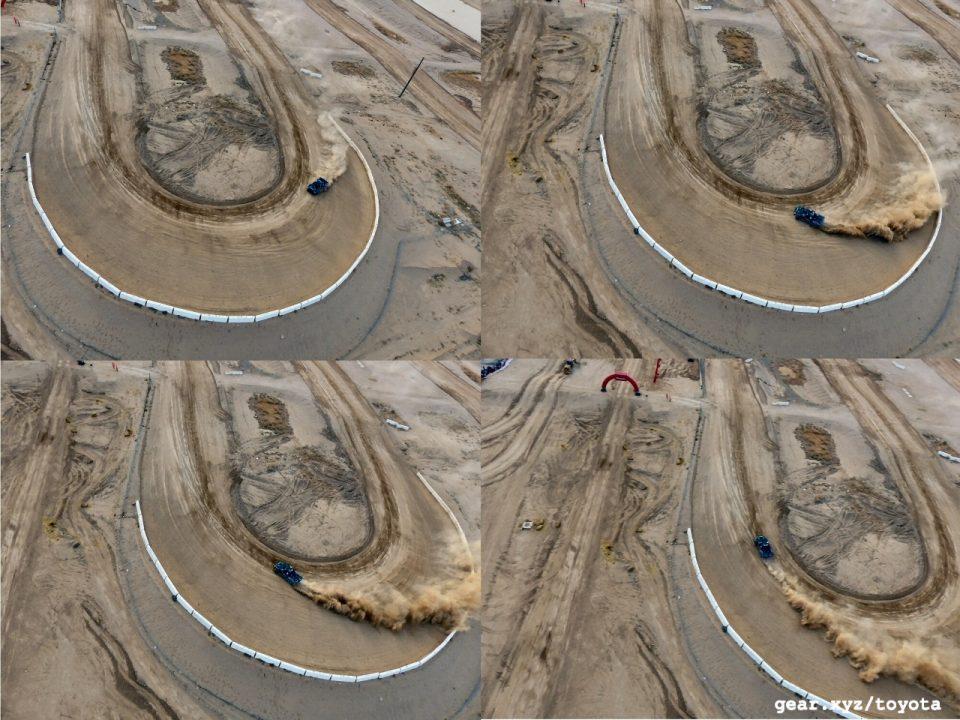 It’s hard to adequately describe the spectacle of desert racing. While the Toyota TRD trucks that we piloted through the deep, sandy moguls of the Mojave did their utmost to keep all four wheels planted on the ground regardless of how jarring the surface might have become, the heavy metal assembled for the Mint 400’s 25 various vehicle classes willingly shed the bonds of gravity and took to the skies as often as possible, bounding across the tough terrain as though it were the surface of the Moon. You’d be forgiven for thinking that the Mint makes a mint for Vegas chiropractors the Sunday after the main event has been run, but spinal compression is merely one of the stepping stones on the way to the event’s $10,000 purse. 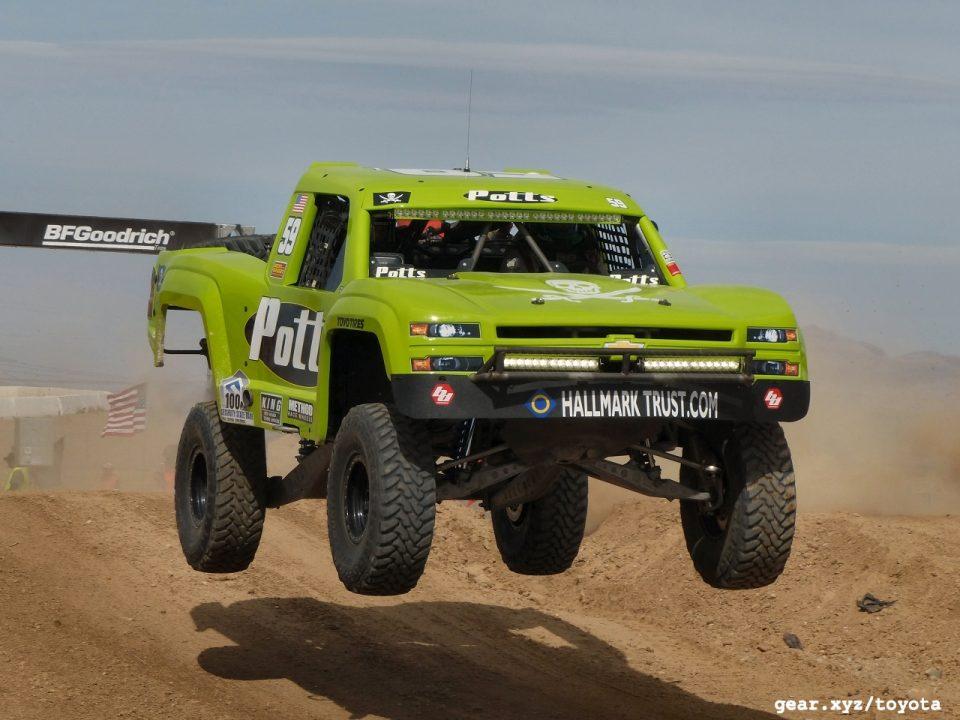 The event itself consists of a sprawling 119-mile course, of which participants must lap three times. Staggered starts ensure that the slower vehicles – buggies, four-wheel drives, Ultra 4s, and home-builts – don’t get crushed by the awesome power of the Unlimited class, which features the most horsepower, and air time, of all the competitors. There are numerous spots along the course where one can catch an eyeful of dust and speed, including the double-jump hump at the start/finish line which leads into a twisting maze of track before emptying into the open desert, as well as a long stretch of straight-away roughly 15 miles from the main pits. Located just beside Jean, Nevada, it is perennially lined with car-loads of fans taking in the action.

For our small group, there was also a third option: helicopters. Skimming a hundred and fifty feet above the desert at 120-mph alongside a Trophy Truck whose driver has pinned the throttle to the floor is a visceral experience like few others – especially when you consider the need to watch out for both power lines and other choppers shouldering their way through the Mint’s crowded airspace. The ability to tap directly into the speeds experienced by the racers, as well as follow the trucks deep into the dunes and washes where they are typically hidden from the eyes of spectators offered a rare glimpse into the one-on-one battles and steely determination of these formidable competitors. 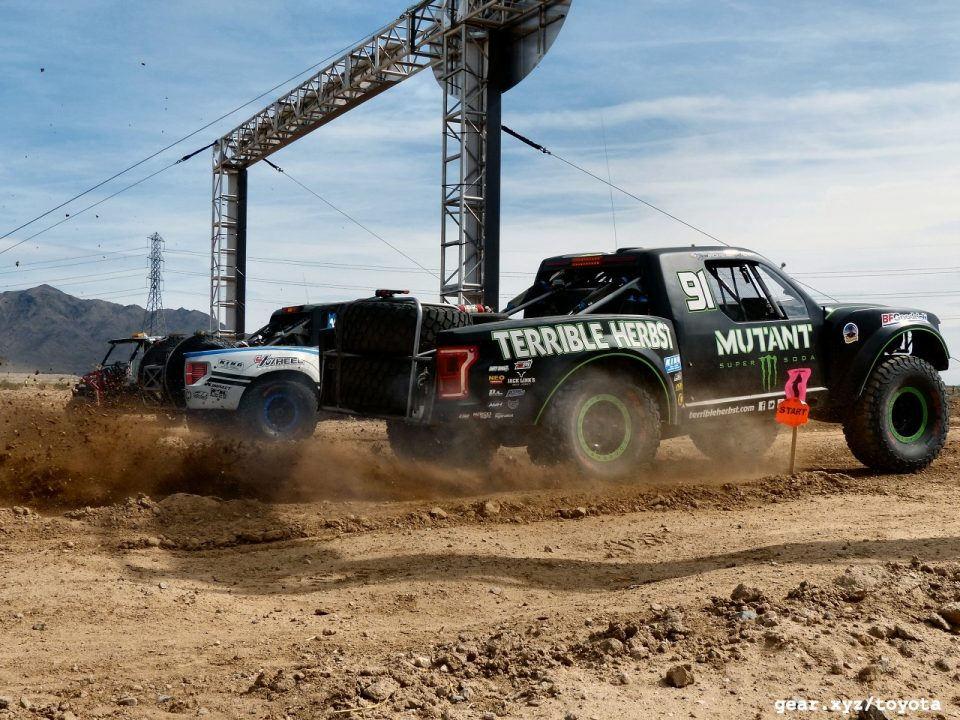 How long the path to glory? This year’s Unlimited class winner, Rob MacCachren, took first place overall with a time of 5:37:35, a 44 second interval over second place, and roughly seven and a half minutes quicker than BJ Baldwin’s fourth-place Toyota truck. To have such a small spread of times amongst the top finishers at the end of one of the more grueling events on the desert racing calendar is incredible, and most racers will tell you that even finishing the Mint 400 is a victory in itself. Knowing Toyota, however – and having met the extremely focused, and dedicated personality that is BJ Baldwin – I have no doubt in my mind that the strategizing and analysis for 2018’s event has already begun.