Today Delta CEO Ed Bastian sent an internal letter with a list of actions that’ll be taken to “protect the financial position of the company”. This set of actions includes an “overall capacity reduction in the next few months of 40 percent – the largest capacity reduction in Delta’s history, including 2001.” While the company will maintain service to London, England, they’re also complying with the 30-day ban on travel to and from continental Europe announced the night of March 12th (Wednesday).

Per the letter, Delta is “currently seeing more cancellations than new bookings over the next month.” Bastian went on to say that “the speed of the demand fall-off is unlike anything we’ve seen.” He listed a set of measures the company would be taking in the immediate future, alongside the couple of measures listed above.

Delta will be parking up to 300 aircraft due to the newly reduced capacity needed in the weeks ahead as a direct result of this global pandemic. They’ll be “deferring new aircraft deliveries.” They’ll be reducing capital expenditures by at least $2 billion for the year – to do that, they’ll do the following:

Delta’s upcoming changes include “substantially reducing the use of consultants and contractors.” They’ll also be offering “voluntary short-term, unpaid leaves as well as an immediate hiring freeze.” Images of the letter were provided by journalist Kris Van Cleave, and can be seen in the gallery below. 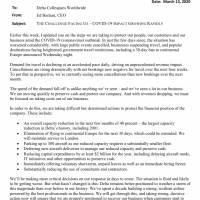 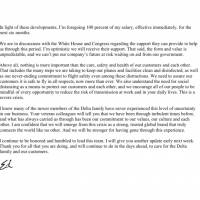 The letter included a note about discussions with the White House and Congress “regarding the support they can provide to help us through this period.” Per Bastian, “I’m optimistic we will receive their support. That said, the form and value is unpredictable, and we can’t put our company’s future at risk waiting on aid from our government.”

Take a peek at the timeline of events from the last couple of days below, and stay tuned on SlashGear for more updates. Also be sure to keep up-to-date with WHO and your local state government’s updates throughout the coming days and weeks.