Not to be confused by the Android tablet with a similar name, the Dell Venue 8 Pro is running Windows. Unlike the difference in operating systems though, there is one similarity to some of those Dell Android tablets, the processor. Dell has the Venue 8 Pro equipped with an Intel processor. Basically, we are looking at an 8-inch tablet running a full Windows installation here, so read on to check out the full SlashGear review.

Coming out of the box and we find a tablet that feels solid, not necessarily heavy, but solid. Based on measurements, the tablet weighs in at 0.87 pounds and measures in at 0.35 (T) x 5.12 (W) x 8.50 (L) inches. Though, once you add some of the available accessories, the weight will only increase a bit. At risk of jumping ahead here, Dell has a folio style case and stylus available. 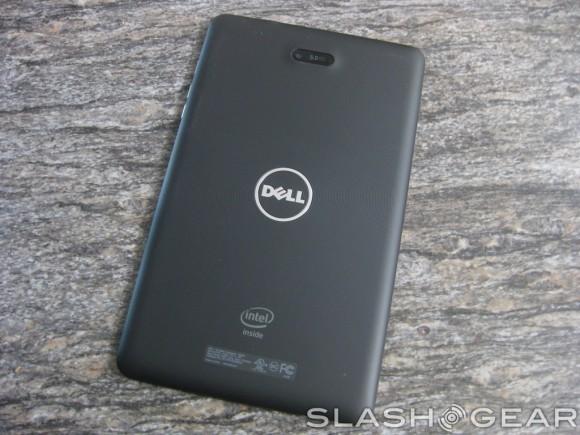 The display measures in at 8-inches and sits with a resolution of 1280 x 800. This one is IPS and aside from being compatible with the stylus, is also 10-point capacitive multi-touch. Another point on the display deals with the brightness. The Venue 8 Pro has a 400-nit display, though running it at full brightness will only affect the battery life. To that point, Dell has the Venue 8 Pro equipped with an ambient light sensor (ALS), which will automatically adjust the brightness. And in theory, help to keep the battery from draining.

The Venue 8 Pro is powered by a quad-core 1.8GHz Intel Atom Z3740D processor with 2GB of RAM, integrated Intel HD graphics and 32GB of internal storage. Supplementing the internal storage is a memory card slot. The microSD card slot sits on the right side, which is also where you will find the volume rocker, power button and microUSB for charging. Looking over the rest of the device and you find a Windows button and headphone jack up top and speaker on the bottom. The left side is clean and clear. 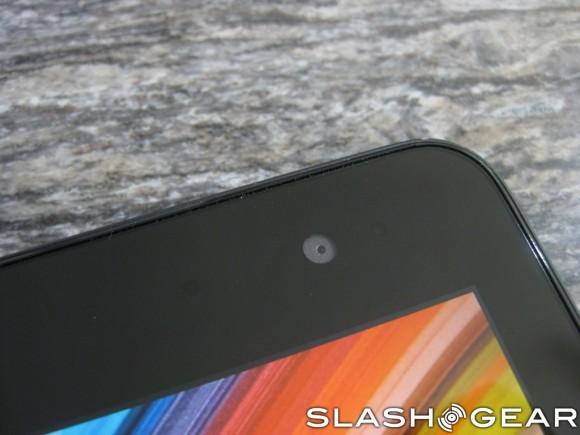 Overall the controls are all nicely placed and easily accessible. But with that in mind, there is at least one sacrifice in terms of that access and the Dell branded folio case — the memory card slot is blocked. Otherwise, all controls are accessible with the Dell folio in place, and in addition, the back has an appropriate opening for the rear-facing camera. We will cover more of the camera specifics later in the review, but will say the Venue 8 Pro has a 5 megapixel on the back and a 1.2 megapixel on the front.

Otherwise, there is Bluetooth 4.0 and for connectivity, dual-band 802.11n WiFi. Dell also offers the option for mobile broadband (LTE), though our review unit did not have that available. Moving away from the hardware specifics and back to the overall look and feel. Dell has the Venue 8 Pro with a soft touch black finish that carries over the back and to the sides. For a bit of a closer look at the tablet, check the image gallery sitting below.

We tend to think of Android when it comes to these smaller tablets, but not in this case. The Dell Venue 8 Pro is running Windows 8.1, which aside from the addition of the touchscreen and stylus — is rather similar to what you would expect with any traditional Windows computer. All the Windows goodies can be expected and those living in the Windows world will likely be right at home with the setup. 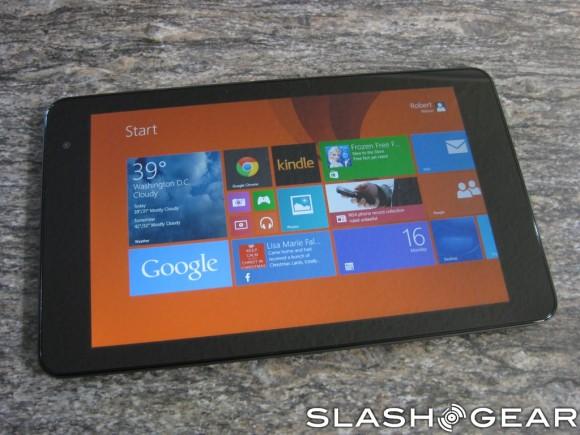 As for Dell specifics here, this tablet includes the Wyse PocketCloud as well as a few others including the My Dell and PC Checkup apps. Overall, the software experience is similar to any other Windows experience. Well, that is with the obvious difference in that you are looking at it on a smaller screen and controlling it with your finger or stylus as opposed to a mouse or trackpad.

That being the case, we didn’t have any issues using either, though the stylus was preferred over the finger. The exception to that came when using the onscreen keyboard. Keeping in mind, the stylus is optional. Dell has the Venue 8 Pro priced at $299, and even offers a bundle pack that includes the stylus and case for $369. Getting away from the price, the tablet provided a solid overall experience in our day to day usage. 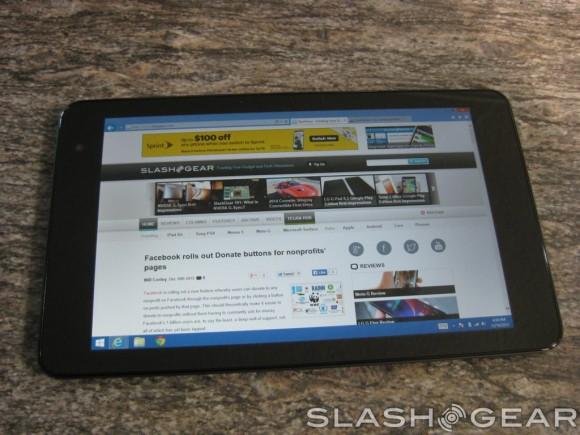 The onscreen keyboard was more than capable and the tablet switched from portrait to landscape and jumped between applications without any reason for concern. As for some hard numbers, the browser benchmarks, using SunSpider offered results of 564.0ms for Javascript performance. In comparison, the Windows RT running Nokia Lumia 2520 and Microsoft Surface 2 scored results of 492.5ms and 390.5ms respectively.

Getting past the slight awkwardness of taking pictures with an 8-inch tablet, the Venue 8 Pro is able to capture some decent pictures. First things first though, the front-facing camera, while sufficient for video chatting — is not the camera you want to use to grab those pictures. Moving past the obvious and we find a 5 megapixel camera on the back.

The camera lens is towards the far left (when the tablet is held in portrait) which does mean you will have to be slightly careful with hand placement. But aside from that small issue, the camera software is relatively simple. Of course, some could also say that makes it easy to use. Basically, launching the camera will bring an option to capture an image or record some video. Just two buttons. 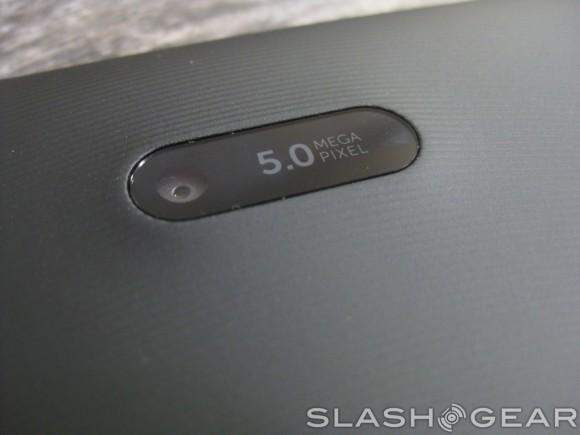 A swipe up from the bottom of the screen does offer a bit more. In this case you will then see an option to head to the camera roll as well as flip from front- to rear-facing, a timer, and settings for exposure and spot adjust. We suspect most will simply launch the camera and begin hitting the shutter button though, so with that having been said, sitting below is a sample gallery with six images.

These are not the best images we have seen from a mobile device, but they should be more than acceptable in a pinch and for sharing. Plus, the camera app launches quick and there is little delay in terms of tapping the shutter button and having the image saved in your camera roll. Additionally, the camera roll provides some basics in terms of image editing.

With that in mind, Dell has the Venue 8 Pro loaded with an 18 WHr battery which they have said should be able to get up to 9.9 hours of run time. In our time with the tablet we didn’t quite see that amount, however we were getting fairly close. With heavy use days that consisted of lots of screen time and lots of WiFi we were seeing a little more than 7 hours. Not quite the promised 9.9, but enough to get most users through a day.

Device manufacturers often have accessories ready to go and while these are clearly optional, the folio style case and stylus were a welcomed addition here. As mentioned earlier, the tablet by itself is $299 and a bundle pack with the accessories included here in the post sells for $369. Basically, this comes down to whether or not the case and stylus are worth the extra $70. 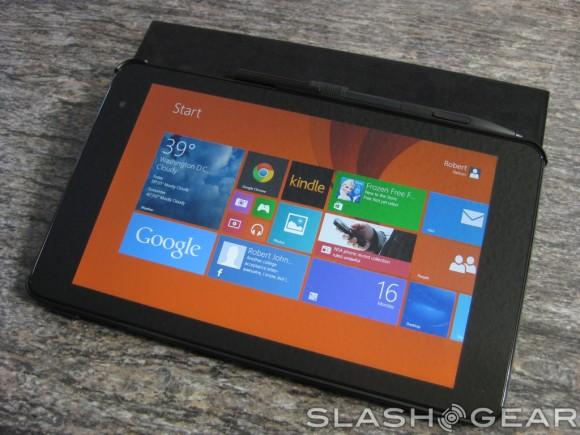 Based on our usage that would be a yes. The case, as can be seen in the image sitting above and below — allows the user to prop the tablet in a few positions. You have the one from above, which brings the tablet down to a good position for typing using the on-screen keyboard. And below offers a look with the tablet sitting higher, or in other words, in a good place to sit back and watch some video. 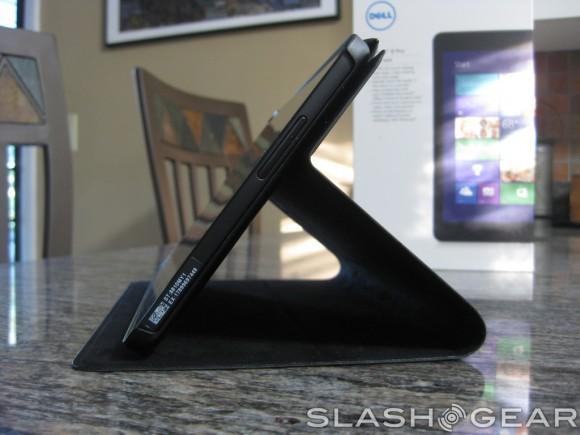 The case itself seems to be durable. The exterior is rubbery, but without any sort of grip to it. We wouldn’t go as far as saying this would make it easy to slip from your hand, but the case does not have the expected grip feel that comes with a typical matte exterior. On the inside it is nice and soft to better protect the display.

There are a few more shots of the case (both with, and without the tablet) sitting in the above gallery. With the exception of the memory card slot, all other ports, buttons, controls, ect are accessible with the case on the tablet. We had the case in action for a few weeks and did see one small issue of wear. The case didn’t tear, but the back did have a noticeable scuff from having it on and off of various surfaces. 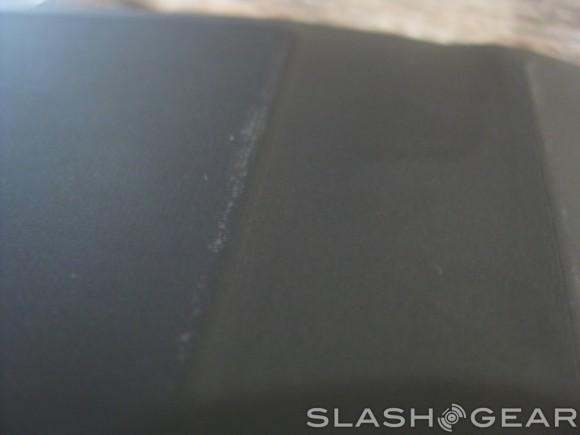 In the end, the case seems to add enough value to the use of the tablet to offset any added cost. Not to mention, we would rather have that small scuff on the case as opposed to the tablet itself. We also tested the stylus, which works on a AAA battery and has a button for clicks. Overall, this is just what one would expect with a stylus — it was comfortable to hold given it felt like an average pen and was a but nicer as compared to using your finger. A few shots of the stylus can be seen below.

Bottom line here, the Dell Venue 8 Pro appears to be a decent value for the asking price. We do have to admit though, we struggled a bit to find a place where it truly fits in our work flow. Granted, that is just one specific person, so we have to discount that thought a little bit. If you are living in a Windows world, whether it be for work or pleasure, the Venue 8 Pro could be a viable alternative as compared to your basic Android or iOS tablet. 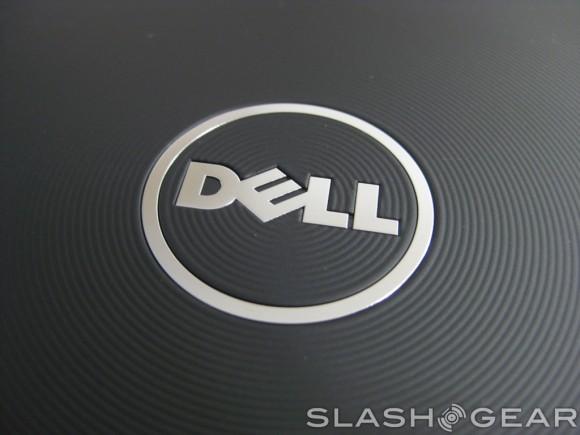 The big drawbacks for us was the lack of a full-sized USB port and more, the lack of HDMI for connecting an external display. In the end it seems we could have been using the Venue 8 Pro at home, in the office and on the go given that. But with the current setup, an 8-inch display just wasn’t big enough for us to really get down to business in terms of work. But that said, the Venue 8 Pro is a $199 device, which means for some, this may be more of a secondary machine and that being the case, the external display support likely wouldn’t be much of an issue.