NASA’s MAVEN craft has sent back data on auroras and dust at high altitudes above Mars – the latter is a mystery to observers both amateur and professional. Back in February a couple of amateur stargazers first announced spotting this dust cloud (having spotted it all the way back in 2012). There was quite a bit of nay-saying at the time about the origin of said photos – and their resolution – so we explained why images of the dust were of such terrible quality. Now it’s MAVEN’s turn.

Having finally gotten into position, so to speak, MAVEN, (having been launched relatively recently, in 2013), can now begin to feed back results.

NASA has confirmed today that MAVEN has detected aurora that “reaches deep into the Martian atmosphere.” This fancy light show is “similar to Earth’s ‘Northern Lights’, but has a differen origin.” So no big mystery there – just a bit of an atmospheric / sun refraction soft of situation – as shown in the NASA rendering below. 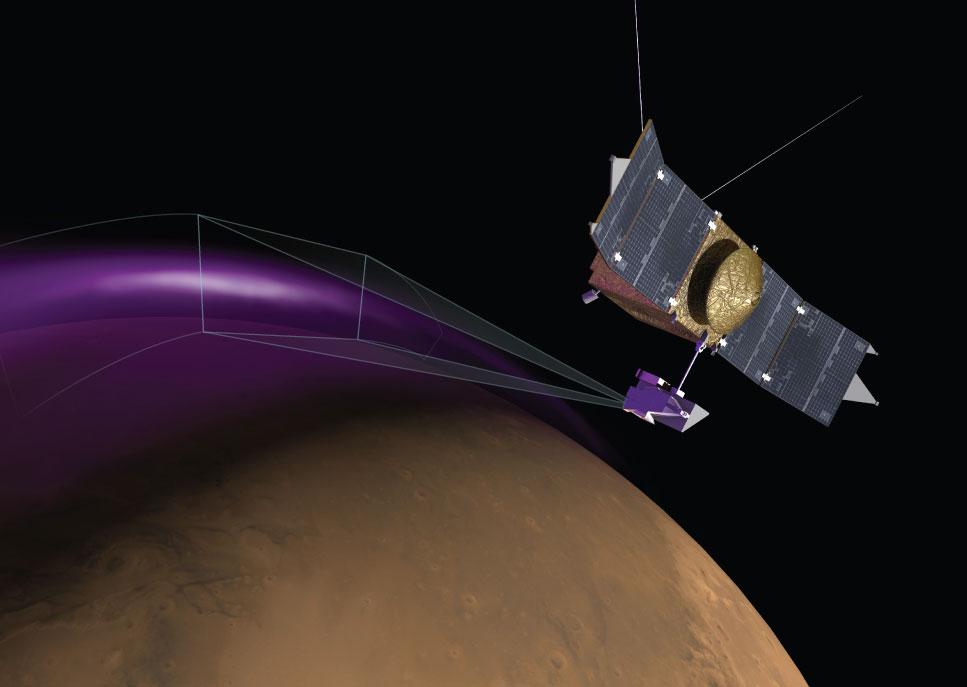 The dust, on the other hand, is still an unknown. Dust has been detected at altitudes between 93 miles (150 kilometers) to 190 miles (300 kilometers) above the surface.

This presence of dust “was not predicted”, said NASA, but there is no hazard to MAVEN or any other orbiting spacecraft at this time.

Hypothesis from NASA include:

• dust wafted up from the atmosphere
• dust moving in the solar wind away from the sun; or
• debris orbiting the sun from comets.
• dust coming from Phobos and Deimos, the two moons of Mars

The cloud of dust was first detected by MAVEN’s Langmuir Probe and Waves (LPW) instrument. While NASA does not currently have an explanation for the dust that they’re confident in, they do confirm that the cloud has been present “the whole time MAVEN has been in operation.”

It’s suggested that “even in the densest areas” of this dust cloud “it is still very thin.” So thin, in fact, that no other MAVEN instrument has detected the dust cloud’s presence.