DARPA’s ElectRx self-healing program is now underway, with the research entity having selected seven research teams who will work toward the goal of using electricity to heal wounded soldiers. DARPA describes this as being a “closed-loop system” that heals via “modulating the activity of peripheral nerves,” with the targeted diseases including everything from inflammation and achy joints to PTSD.

We first heard about the ElectRx program more than a year ago; the military’s research arm envisions a future where a variety of diseases can be treated using electricity rather than conventional drugs and therapies. How this will be pulled off is the hard part. Says DARPA, the selected teams will work on a “diverse array” of technologies and research in support of this mission. 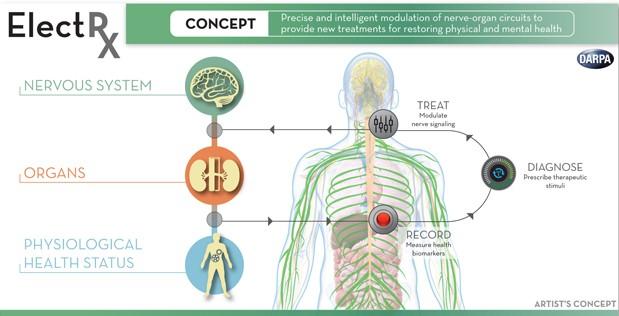 DARPA points toward pacemakers as one example of using electricity to heal — or at least sustain — a human with an ailment. A pacemaker works by using electricity to keep a heart beating. In the future, such electrical devices may be used with other organs to address other diseases, as well. The system could also be used to improve healthy human functioning.

The research agency says, for example, that stimulating peripheral nerves could be used to regulate the rate at which neurochemicals related to memory and learning are produced — if someone has a natural imbalance, the system could fix that. As with many DARPA efforts, the ElectRx program will take place in stages; Phase 1 will involve mapping the body’s neural circuits.