Dark energy, time-traveling star gazing, and a telescope that looks like a Bond villain’s ray gun: when it comes to hunting down the reasons why the universe is expanding, it’s hard to know what aspect is cooler. The BOSS (Baryon Oscillation Spectroscopic Survey) team in New Mexico, US, has been peering into the depths of distant galaxies with the Sloan telescope, tracking the movement of quasars so as to measure how the universe has been changing since the Big Bang.

In a new paper submitted by the BOSS team to the Astronomy & Astrophysics journal, the researchers describe a new technique for tracking more distant galaxies than has previously been attempted. Rather than spotting the galaxies themselves, which are too dim for the Sloan telescope to keep its metaphorical eye on, BOSS has been eyeing nearly 50,000 quasars to put together a 3D map of their distribution and movement with those galaxies.

That alternate view means the BOSS astronomers can follow movement up to 11 billion light years away from Earth. Because of the speed of light, the quasars that are being seen today are as they were many, many years ago: two billion years after the Big Bang itself, in fact. 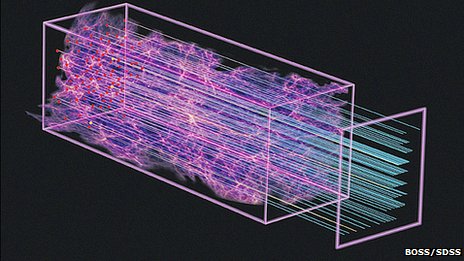 “From the Big Bang, the expansion of the Universe was decelerating,” Dr Matthew Pieri of the BOSS team said, “and then we crested the hill about seven billion years ago, and it was like something putting the foot on the pedal and the acceleration occurred.”

Dark energy is science’s answer to why gravity alone can’t explain the movement of galaxies, an invisible force that pushes matter apart and thus continues the expansion of the universe. As much as 73-percent of the universe is dark energy, it’s theorized, with 23-percent being dark matter; special cameras, such as the 570-megapixel DECam, have been developed to better study it.