Cyclists now have their own glow in the dark road

The Netherlands seems to have a fascination with things that glow in the dark. Just after completing the “smart highway“, a.k.a. highway N329 in Oss with glow in the dark road paint, designer Daan Roosegaarde is at it again, this time in Nuenen, to shed some light on a bike path during the night. It uses the same technology but applied on a smaller scale and with more styling this time around. The effect is both enchanting and slightly disturbing, which perhaps presents a predicament to cyclists in the area.

The path has been named Van Gogh-Roosegaarde, a tribute to the artist who called the city his home. Unlike what you would expect in traditional street lighting, the luminescent paint curves and bends, forming patterns that are reminiscent of one of Van Gogh’s most popular masterpieces, The Starry Night. Unlike a highway, which needs to conform to safety standards and whatnot, Roosegaarde had more artistic liberty in this bike path. He affectionately calls it “techno-poetry”, technology combined with experience, where history and the future meet. 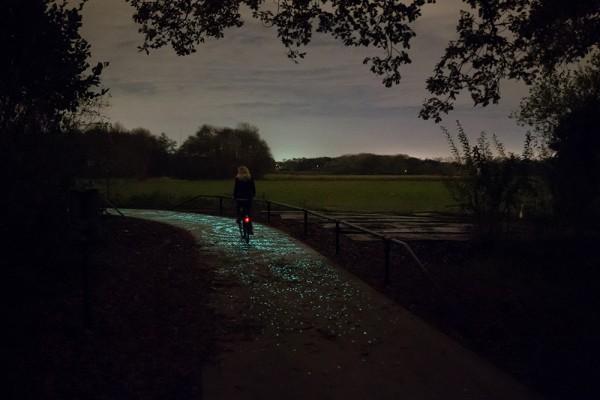 To pull of this second project, Roosegaarde’s studio hooked up again with construction company Heijmans. The two were the same partners that brought the Smart Highway to life, or to light. The same type of paint is applied. The paint soaks up sunlight all throughout the day and then discharges its eerie green light at night. And in case there was not enough sun to charge it beforehand, emergency auxiliary power will feed it instead. The ghostly green glow of the road does make for a pretty sight, but it still remains inconclusive whether this makes such paths safer or if traditional lamps are better, but at the expense of energy consumption.

Like the Oss highway, the Gogh-Roosegaarde path has been years in the making, but now the path is open for cyclists to ride through in awe, and perhaps fear, putting the resiliency of the material to a real world wear and tear test. It will be interesting where Roosegaarde and Heijmans will take their paint next. One to light a pedestrian walkway, perhaps? 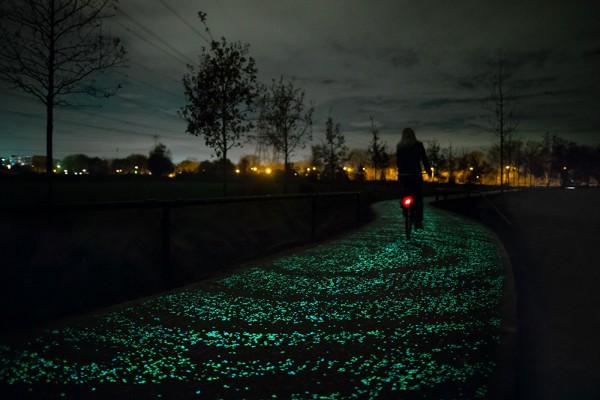