If you’ve read or watched anything concerning Cyberpunk 2077 since the game launched last month, chances are you’ve heard of the litany of problems the game has, particularly on previous-generation consoles. The state of the game prompted a rarely-seen response from Sony in which it delisted the game from the PlayStation Store and, along with Microsoft, started offering refunds to anyone who wanted them. It’s been just over a month since Cyberpunk 2077 launched, and now CD Projekt co-founder Marcin Iwiński has released a statement detailing what went wrong with the game.

The five minute statement was published to Twitter just a short while ago, and Iwiński opened it by admitting that the console version of the game “did not meet the quality standard we wanted it to meet.” He apologized on behalf of the leadership team at CD Projekt, and asked players not to blame the development teams at the company for what happened with the console version – rather, Iwiński says that it was his and the CD Projekt board’s decision to release the game.

Dear gamers,
Below, you’ll find CD PROJEKT’s co-founder’s personal explanation of what the days leading up to the launch of Cyberpunk 2077 looked like, sharing the studio’s perspective on what happened with the game on old-generation consoles. pic.twitter.com/XjdCKizewq

Diving into Iwiński’s explanation, he notes that the game is “huge in scope,” and since it’s set in a big city, it’s particularly taxing on hardware. The goal, Iwiński explains, was the make the game look “epic” on PC first and then scale back the experience for consoles. While that initially seemed doable, Iwiński says that the in-game streaming system had to be constantly changed and improved, and in testing the game CD Projekt actually missed a lot of the problems that players are experiencing. According to Iwiński, CD Projekt believed that it could deliver the necessary improvements to the console version in Cyberpunk‘s day-zero patch.

Iwiński then covers the review process, which saw only PC keys available to reviewers at first, with console keys not becoming available until just a couple of days before release because of the studio’s continuous work on the day zero patch. Add to all of this the complications of working from home, and it seems that the leadership at CD Projekt Red bit off more than it could chew with the console version of the game. 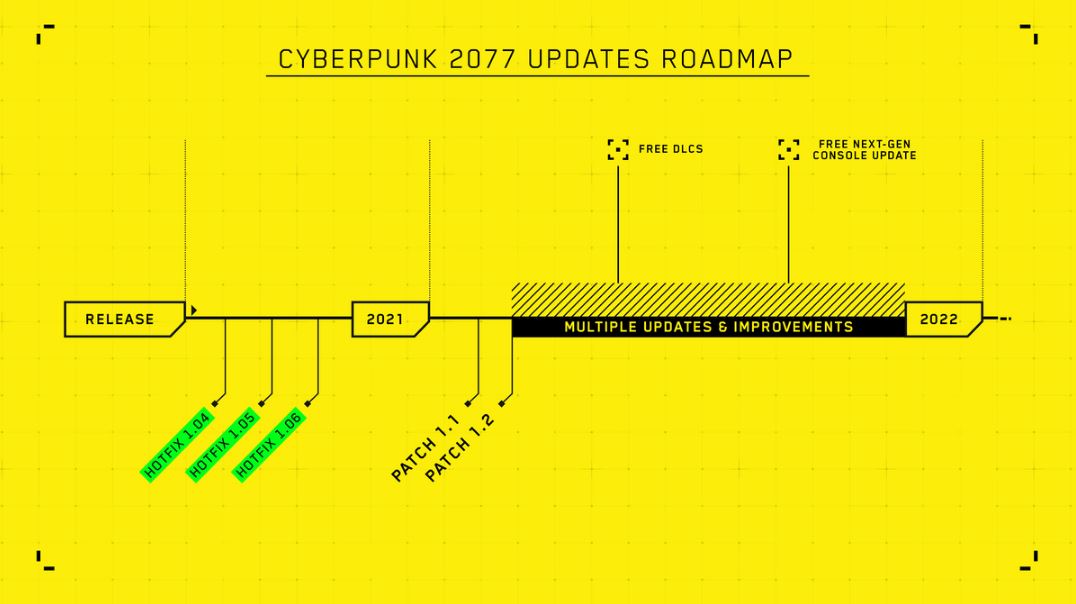 Iwiński also covered the company’s plans for the future with Cyberpunk, sharing the timeline you see above. We’ll see Patch 1.1 and Patch 1.2 arrive early this year with major improvements, and then the company will continue shipping updates and improvements for the game throughout the rest of 2021. We’ll also see free DLCs for the game this year, along with the promised next-gen console upgrade later on in 2021 – Iwiński says it should arrive in the second half of the year.

CD Projekt leadership certainly needed to make this statement concerning the state of the game, but the question is whether or not this is enough for console players (and to a lesser extent PC players) who feel burned not only by the fact that Cyberpunk 2077 has issues, but also that it isn’t what some were expecting out of the game. CD Projekt definitely has its work cut out for it in the coming months, but for now, anyone who is disappointed in the game should watch through Iwiński’s full statement above.