Despite the recent resurfaced scandal surrounding Mars One, it’s business as usual for those working on the real and present-day Mars. That doesn’t mean, however, that NASA‘s scientists don’t have anything just as spectacular but even more scientifically sound. From the results gathered by Curiosity Rover’s “Sample Analysis at Mars” equipment, or SAM, researchers discovered the presence of nitrogen, quite a lot of them. While this alone might be boring, it’s the nature of those nitrogen molecules that are more interesting. These particular molecules are a type of nitrogen that could have very well been useful to organic life.

While we might immediately think of oxygen as the life-essential element, nitrogen plays an equally perhaps even more important role. It is the building block of life, making up DNA, RNA, and proteins that, in turn, make up body parts. But that kind of nitrogen is only useful if it exists in its “fixed” form to mix with other molecules. Nitrogen in the atmosphere, both on Earth and on Mars, exists as N2, or two strongly bonded Nitrogen atoms. The only way to “fix” atmospheric nitrogen is either through the activities of certain organisms or through energetic events, like lightning strikes or meteorite impacts.

Scientists aren’t jumping to the conclusion that the biologically friendly nitrogen that they found were a product of living organisms. Instead, they believe that the traces they have found are quite ancient and might have been produced by incidents such as the multiple meteorite crashes that assaulted the Martian surface. That said, the presence of nitrate molecules still support the predominant theory that, at least at one point in the very distant past, the environment on Mars was actually habitable. That’s especially convincing if you take in evidence that also supports theories that Mars also had large bodies of water, pretty much like our oceans today.

Curiosity’s rover sibling, Mars Opportunity, is also making headlines. The rover has completed what is being billed as the first ever Martian marathon, covering a distance of 26.221 miles or 42.198 kilometers. And it only took it 11 years and 2 months to do so. That time might be laughable as far as human marathons go, but it is definitely a first for science, being the first time a distance of that length has ever been covered on another planet. This marathon achievement is added to its growing list of medals, which includes the space driving record in 2013. Sadly, after more than a decade in service, the Opportunity might be slowly on its way out, with its arm starting to suffer the robotic equivalent of arthritis. 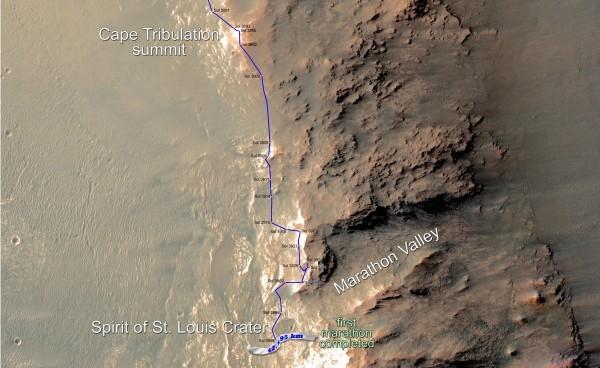