Welcome back to Mars, ladies and gentlemen, as the NASA Curiosity mission continues its epic journey across the planet’s surface with a news note that they have found radiation levels totally safe for human beings. This finding is entirely encouraging for the future of Mars exploration as far as actually sending human beings there goes, and certainly doesn’t send a negative mark back on the possibility of us living there someday. Of course if you’re a fan of the original Total Recall, you don’t care one way or another simply for the safety of your eyeballs, but still.

Of special note here is the fact that this is the very first time radiation has been measured from the surface of another planet – besides Earth, that is. This is done with the rover’s RAD, or Radiation Assessment Detector, and has shown the radiation levels on the ground as rather similar to what the astronauts on the International Space Station experience daily. RAD Principal Investigator Don Hassler of the Southwest Research Institute’s Boulder, Colorado branch noted the findings as encouraging.

“We see a definite pattern related to the daily thermal tides of the atmosphere. The atmosphere provides a level of shielding, and so charged-particle radiation is less when the atmosphere is thicker. Overall, Mars’ atmosphere reduces the radiation dose compared to what we saw during the flight to Mars.” – Hassler 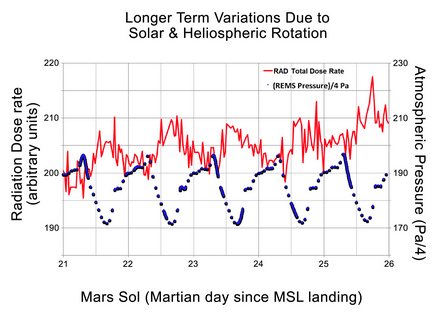 NASA has also added that the overall goal for this mission is to use 10 instruments on Curiosity “to assess whether areas inside Gale Crater ever offered a habitable environment for microbes.” This mission has been followed by tech blogs, science publications, and everywhere in-between simply because of the rarity of a Mars mission of this magnitude. We’ve seen tiny findings that mean little to us average citizens as well as lovely photos taken from the surface, perfectly suitable for wallpapers for your smartphone.

Above: The header image in this article shows five scoopfulls of material from what NASA describes as a patch of dusty sand called “Rocknest.” This set of five “bite-marks” shows how little NASA needs to analyze the surface – each mark is about 2 inches (5 centimeters) wide.

Have a peek at the timeline below of just a small sample of the goings-on around the Curiosity mission and consider the implications of the impact this NASA action is having on the future of space exploration. We’re hoping that science will prevail, allowing here more funding for NASA so that we can continue to expand our space-loving minds through the rest of our lifetimes and beyond – make it happen, public!