NASA has released the first full-resolution images of the Martian surface, with the Curiosity rover beaming back shots of its new home in the vast Gale Crater. Taken with Curiosity’s Navcams, and the rover itself visible at the bottom of the frame, the images show the rim of the crater in the distance as Curiosity goes through its setup and testing stages.

“The topography of the rim is very mountainous due to erosion” NASA explains. “The ground seen in the middle shows low-relief scarps and plains. The foreground shows two distinct zones of excavation likely carved out by blasts from the rover’s descent stage thrusters.”

That excavation has also been checked out in close-up, again using the Navcams, and leaving what’s believed to be bedrock outcrop in view. It’s also evidence of the shallow soil depth, though the surface could well be more like a pavement on top of the underlying bedrock, with multiple smaller stones being compacted together into a top layer. 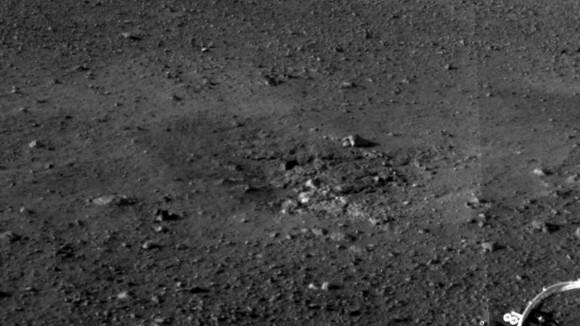 As for Curiosity’s testing, the high-gain antenna has successfully been directed toward Earth, and a remote sensing mast has been full erected. Radiation sensors have begun collecting data – though have not yet beamed it back.

Next up is running through the Alpha Particle X-ray Spectrometer (APXS), Chemistry & Mineralogy Analyzer (CheMin), Sample Analysis at Mars (SAM), and Dynamic Albedo Neutrons (DAN) instruments to make sure they all survived the long journey intact.