Having been launched on the 8th of January, back when we first got our hands on the unit, the CST-01 E-ink watch’s Kickstarter has reached its $200,000 USD funding goal in just two days time. This little gem of a watch is just 0.80mm thin, flexible and ready to be worn by the public right this minute. This is a project launched by CST: Central Standard Timing in collaboration with E-ink, and it’s got an amazing 42 days left to go in its first crowd-funding round on Kickstarter when this post is published – it’s going places!

This watch is constructed atop a single piece of ever-so-slightly flexible stainless steel. It’s made up of a variety of simple components laminated into a 0.5mm pocket in the steel, created in both black and white (with a display that reflects the black or white choice you’ve made with your purchase. This watch comes with a base station that charges your watch up, also from whens you can change your watch format from 12 to 24 hours (or vice-versa).

With the CST-01, you’ll have just about as minimal a watch as you can in this universe of ours. Have a peek above at the talk we had this past week at ShowStoppers during CES 2013 with Sriram K Peruvemba, Chief Marketing Officer of E-ink. We got the opportunity to see not just the black model, but a slightly stripped-down version as well, allowing us to see the basic components of the machine in their purest form.

Be sure to head over to the Kickstarter for the CST-01 and let us know if you’re going to toss down some funding bucks to see this watch take hold en-masse. Also be sure to hit up our ShowStoppers 2013 tag as well as our CES portal to see the rest of the action as it came down in Las Vegas, Nevada! 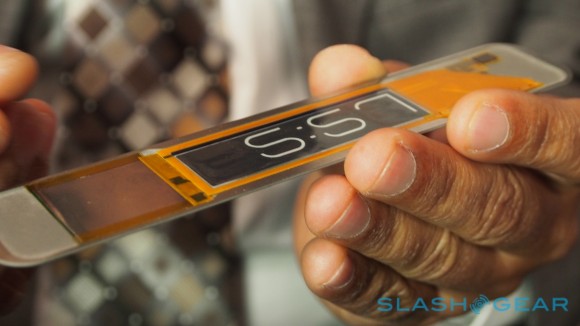