This week the folks at Cree have begun pushing their newest set of LED lightbulbs. These bulbs may look like a standard lighting fixture, but they’re working with unprecedented bits and pieces – like a Color Rendering Index number of 93. This company is not only making way for a new era of color-correctness, they’re aiming to bring the industry to a 100-percent LED awareness level as well.

Two new bulbs are coming to the market this week in the TW (TrueWhite) Series Cree LED Bulb. This launch is strange – not because of the technology in the bulb, but because of its launch schedule. The initial TW Series launched slightly less than a year ago in a very limited fashion in California.

This week, the company is bringing the bulb lineup to Home Depot stores across the United States. The two bulb lines available are a 40-watt replacement TW Series Cree LED Bulb and a Cree 60-watt replacement bulb, available for $13.97 and $15.97 respectively. At prices like these, they’ll have a tough time competing with bulbs that cost just a few dollars. 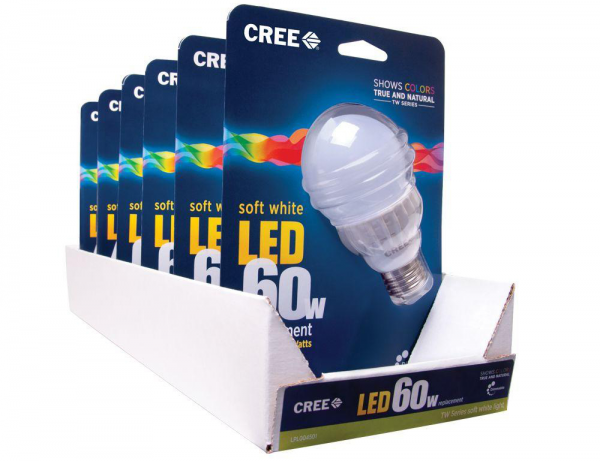 Costs – users will end up finding – will come out of the energy used by and long-lasting nature of the Cree series. The team suggests that the TW Series Cree LED Bulb lasts 25 times longer than your everyday average incandescent lightbulb. They also suggest that this bulb uses a whopping 78-percent less energy than your standard incandescent bulb.

Each bulb also works with a 10-year limited consumer warranty, so we’re going to go ahead and assume you’ll not need to replace them any time soon.