There are a few titles that really stand out when I think about the original PlayStation. Final Fantasy VII, Spyro the Dragon, and of course, Crash Bandicoot. Sadly, only two of these series are still alive and well (okay, I wouldn’t say that Skylanders is doing Spyro any real justice) with poor Crash being left out in the cold. However, his fans haven’t forgotten him.

One modder by the name of Vadu Amka decided that their favorite marsupial wasn’t getting enough love, and decided to mae a stunning tribute to the beloved character. Fittingly, they modded one of the original fat PS2s, which the last games were released on. While the best, and original games were on the original PlayStation, I can’t see this particular mod looking quite as good on that system.

The mod has been a work in progress since sometime last year. The console’s features come are made from resin, epoxy, and acrylic. The mask is made from resin and foam, along with plated linden and cherry wood. You’ll be able to see it on display at various art exhibits, including “Made in Asia” in Brussels, and the Re-play Festival near Cannes. 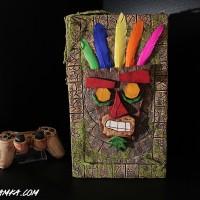 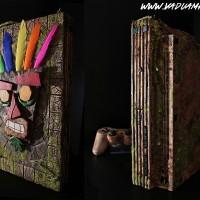 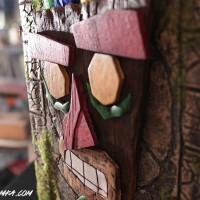 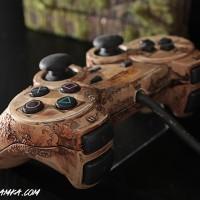 If you’re looking to nab one of these beautiful Crash Bandicoot tributes, you’re out of luck. This is a one-of-a-kind piece, and is not up for sale. You can always take inspiration from it, if you need your own Aku Aku mask PS2.