Could Royole FlexPai 2 be a foldable phone worth your cash

Samsung is arguably leading the way with its foldable smartphones globally. In China it’s a different story – a different name. Huawei? No, it’s Royole we are referring to. Royole hit the center stage with the launch of FlexPai – the first commercial foldable smartphone launched months before Samsung’s maiden attempt went official. It wouldn’t be fair to say FlexPai was a success, just like Samsung’s fiasco device – the Galaxy Fold, it had endless complaints too. Samsung however sprung back well with the Galaxy Z Fold2 and Royole intends to do so with the FlexPai 2.

Royole is best known for developing full-color flexible screen technology for clients like Airbus and Louis Vuitton. The Chinese OEM entered the smartphone world directly with a foldable option – a bold move to reckon– but it fell flat on its face in the endeavor.

The first generation FlexPai was not worth contention but that doesn’t stand true for the FlexPai 2.

We have come to realize, follow-up devices tend to crease out the flaws of their predecessors and do significantly better in sales. This is an example set straight by FlexPai 2, which is reportedly doing well in China, where it has been available since September this year.

There are no sales figures per se but the company is overly satisfied and is now contemplating a global launch of the phone. Markets are not disclosed, but early 2021 is the tentative timeline when it should trickle out of China. This claim brings us to the vital question: Is the FlexPai 2 a foldable smartphone you should wait for, Will it be worth your cash?

A leap beyond the past 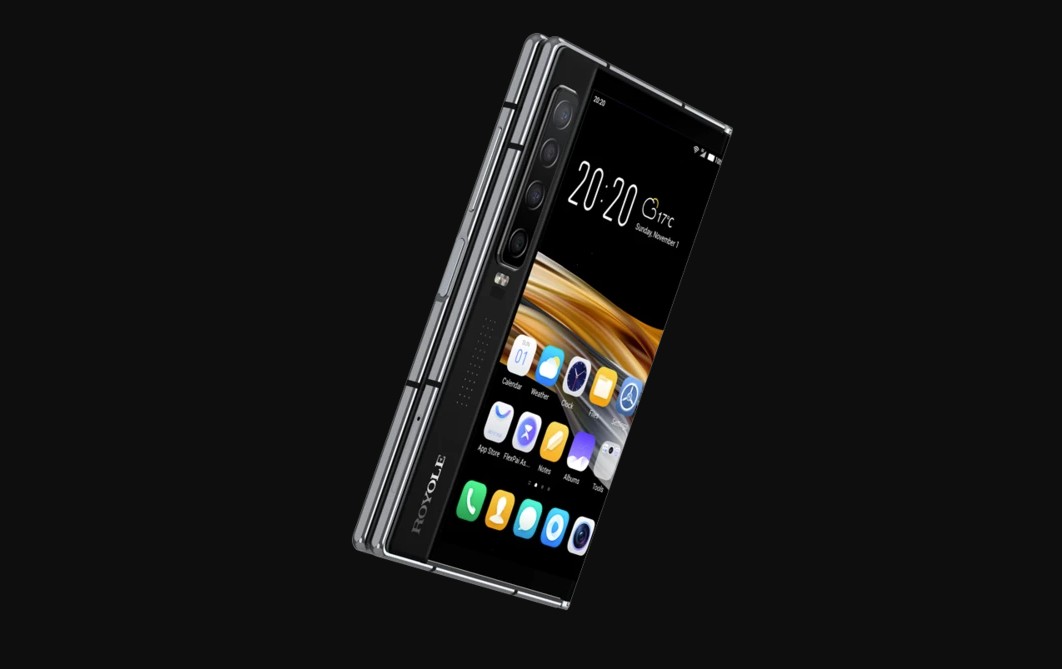 Various first-person narratives claim – the FlexPai 2 “is a surprising improvement over the original,” it’s a device that feels good in the hand. The improvement of the phone is noticeable in the screen, which now folds completely flat – with no hint of crease or bend of any sort.

The 0-180° adjustable hinge that makes integration for seamless folding possible is, according to the company, constructed from aircraft-grade aluminum titanium alloy and liquid metal.

The mechanically crafted hinge makes possible a thin and lightweight device that folds to just 12.9mm thick with no gap at all in between two screens. The phone is better secured against dust. The entire package now weighs 339g, which is definitely on the chunkier side, but the FlexPai 2 is more convenient to navigate with one hand when folded (even if your hands are not the biggest) and it fits in the pocket easily to be carried around for big-screen experience wherever your lifestyle takes you. 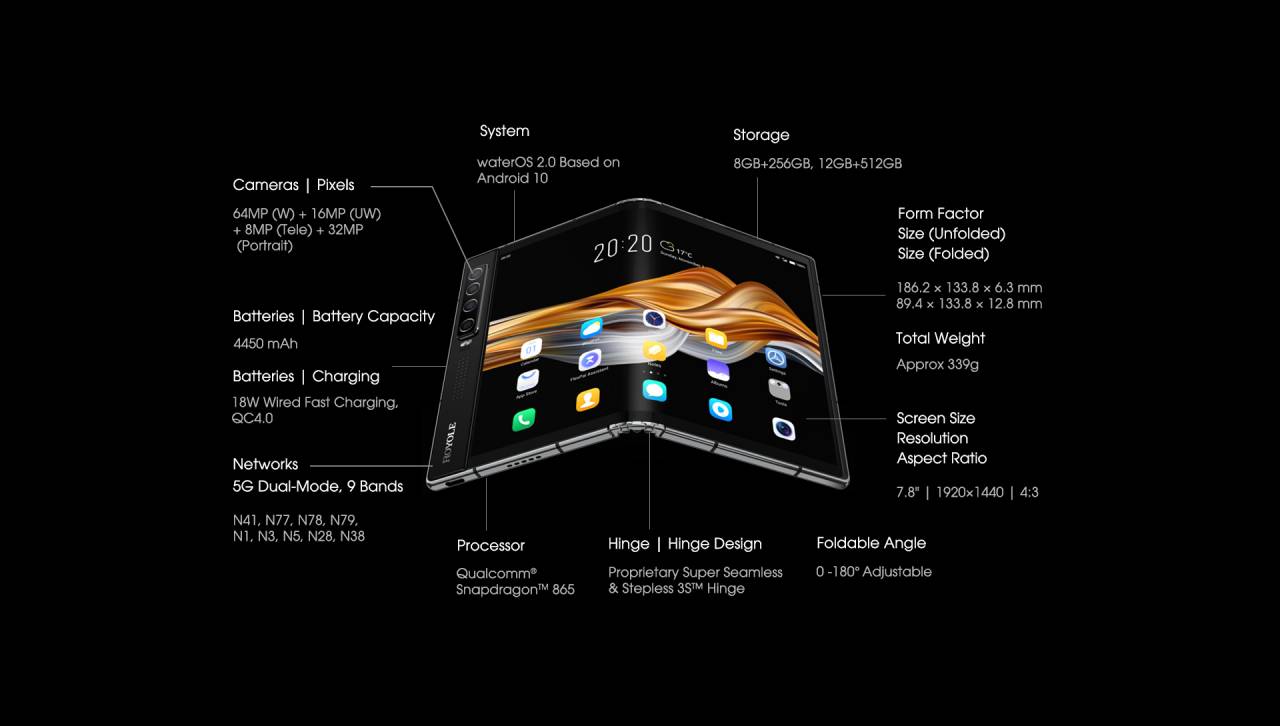 The most notable feature of Royole’s new FlexPai 2, in compassion to the likes of Samsung and Motorola, is indeed its folding mechanism, which leaves no gap between the two halves of the display. Royole’s foldable mechanism has passed 1.8m + bends in certified display folding reliability tests by the National Institute of Metrology of China (NIM). This means you can fold the device 100 times a day for almost 10 years. Real world utility will differ, but it’s a bold claim versus other phones whose reliability is tested for about 200,000 times.

It has the company’s 3rd generation Cicada Wing flexible display which offers more vivid colors with a response speed of 4.0ms. The brighter new interactive experience is well complemented by WaterOS 2.0 based on Android 10.

The 60Hz OLED screen will not have gamers stretching beyond their comfort zone, but it will be an instant bait for someone seeking a foldable device. Mostly because the screen wraps around the device on the front and back, opposite to the book-like concept followed by Galaxy Z Fold2.

This design practically gives you three displays, albeit only one can be used at a time. On the front is a 5.5-inch screen with a wide 16:10 aspect ratio; on the back is a 5.4-inch display with 16:9 aspect ratio – the slightly smaller display is because of the existence of a vertically positioned camera module.

When opened flat the display measures 6.78-inch diagonally – the large screen can split into three windows to facilitate multitasking. A gentle tap on the edge of the screen, when the phone is folded can quickly launch the preset apps drawer – convenient when you’re interacting with one hand.

The processing power of the foldable FlexPai 2 is covered by Snapdragon 865, which should be good enough for most users, even though we are looking at smartphones powered by Qualcomm’s new flagship processor around the time when FlexPai 2 intends to make its international debut. The phone comes with 4,500mAh battery, which has to power three screens but does a fair job at that. It keeps the device juiced up for a day easily.

For the optics, the vertically placed module comprises a quad-cam setup. For the main camera there is a 64MP lens; it is accompanied by 16MP ultra-wide and 8MP telephoto lens. The fourth camera is a 32MP portrait lens, which is meant largely for clicking selfies. For more exclusivity and brightness while clicking pictures with the decently ranked cameras, there is a soft light below the camera array. 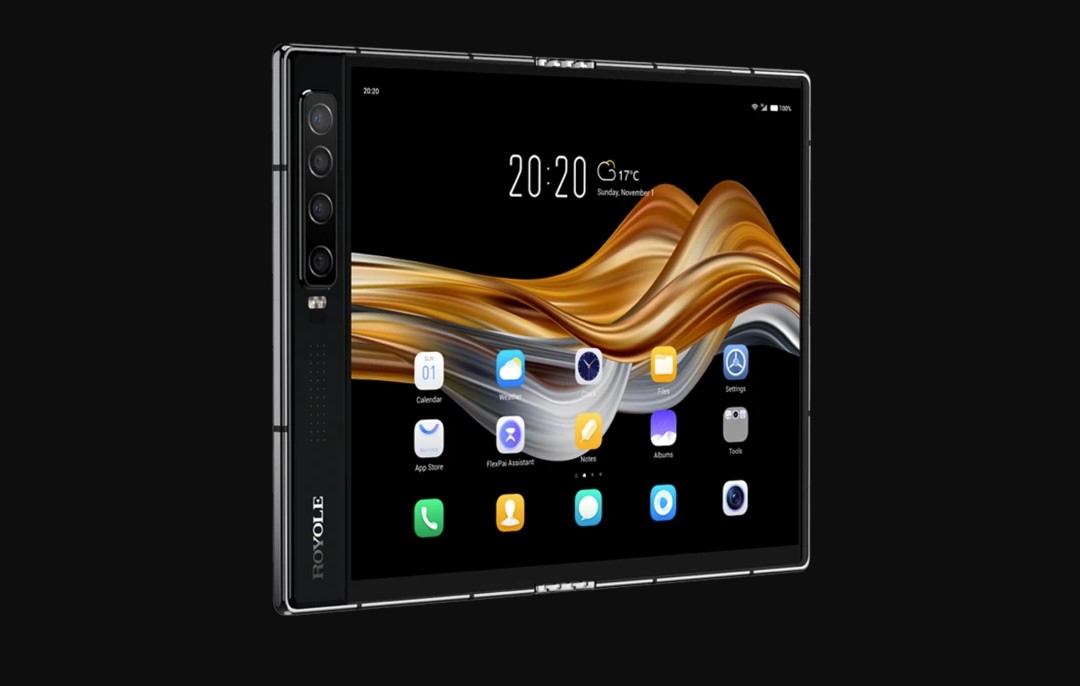 FlexPai 2 sells only in China currently, so getting it elsewhere is a challenge. In all likeliness, the phone is expected to retail outside of China in early 2021, but buyers showing interest should know that the Royole device does not run core Google apps – just like Huawei. While in case of Huawei it’s a forced choice, Royole has opted against the service at will, which leaves room for the global device to roll out with Google apps. It’s just an assumption for now, so you must be open to either case.

It is not easy to recommend a foldable phone to anyone at this point, but if you were to ask, there are fairly two devices to challenge the FlexPai 2 – Galaxy Z Fold2 and the Huawei Mate Xs.

Design is the first choice – Samsung device’s book-like construction is sturdier as opposed to Huawei or Royole phones, whose outward folding design leaves the screens on front and back completely exposed. If you’re not so concerned with the design – the FlexPai 2, priced at 9,999 yuan (roughly $1,500) is a bargain in comparison to $2,000 Galaxy Z Fold2 or Huawei’s Mate Xs, which is even more costly at $2,200.

This cash benefit is provided FlexPai 2 retains the exact converted price when it comes out of China. If Google apps are included and some location-sensitive tweaks are made, the price difference could change and then maybe the outlook for the device also changes in comparison to the more lucrative Galaxy Z Fold2.