A new Consumer Reports survey has put Apple comfortably ahead of Lenovo, Toshiba, Dell and other computer manufacturers for after sales care, with consistently strong performance in phone support, online support and general problem-solving ability. The results lend further weight to Apple’s all-encompassing hardware and software experience, reducing the amount of bounce between companies that PC notebook owners are often faced with.

The survey looked at over 7,000 laptop and desktop owners and their experience of customer support services over a twelve-month period. Lenovo and Toshiba took the number two and three spots, while Acer/Gateway/eMachines languished in a disappointing last place with owners reporting mediocre phone support and a poor track record for actually seeing their machines fixed.

Apple’s computing strength is its degree of control over both the hardware and core software its users experience. As well as defining the MacBook and Mac laptop and desktop ranges themselves, they couple that with OS X and various suites of self-developed software for which Windows users often have to look to various vendors to satisfy. While some have criticized 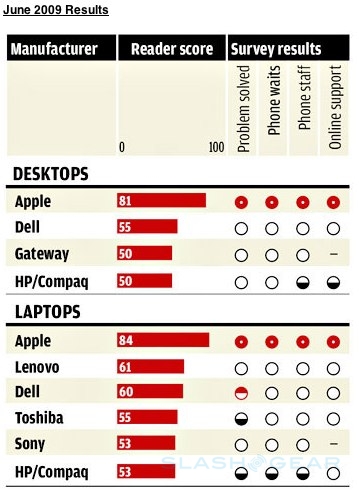 the Apple ecosystem for reducing user-choice and permitting ongoing “premium” pricing, there’s a lot to be said for owners experiencing issues having them solved on the first call to tech support, rather than being bounced between hardware and software providers.

With the imminent arrival of the iPad, it seems likely that Apple’s new tablet will fall somewhere in-between the company’s Mac range and their iPhone smartphone. The latter, while still a carefully controlled, in-house platform, does force users to deal with AT&T (or other regional carriers) when it comes to cellular connectivity. The iPad, while certain models will have integrated 3G data, adds in an extra degree of separation with carriers themselves, however; 3G service is managed on a contract-free, per-month basis, and can be set up – and canceled – on the iPad itself. Owners should only ever have to deal with Apple’s Genius Bars if their tablet develops issues.

We’re interested to hear your own technical support experiences, not only with Apple but also with the other brands mentioned in Consumer Reports’ survey. Let us know in the comments, which vendors are scoring strong – and which are falling short – when it comes aftercare.