Avid comic book readers will be quite familiar with Comixology‘s digital library. They might also be well versed with how those copies are pretty much all “protected” by DRM technology. Comixology is now changing that status quo just a bit and is now offering DRM-free backups, in PDF and CBZ formats, but only for some select titles and publishers.

DRM or Digital Rights Management (Digital Restrictions Management to some) is a hot topic when it comes to digital media such as music, books, and even games. While the theory is that it protects copyright holders, authors, and publishers from rampant piracy, in practice it has also ended up inconveniencing even legitimate consumers. It isn’t a simple black and white matter either. DRM critics hold that buyers should be able to do what they want with their digital copies what they can do with physical versions, like lend, give away, resell, or even something as simple as making it available on numerous devices without limits.

Comixology uses a very strong DRM that ensures its books can only be read from its multi-platform apps or on the web-based reader. Starting today, however, there is a new way to read those comics, at least those that come from certain publishers. Not all have jumped on the DRM-free train and the current roster includes Image, IDW Publishing, Dynamite Entertainment, Top Shelf, Thrillbent, Monkeybrain, and Zenescope, with many more to follow according to Comixology. Readers who have one or more titles included in this new option will receive an e-mail informing them of their PDF or CBZ copies. 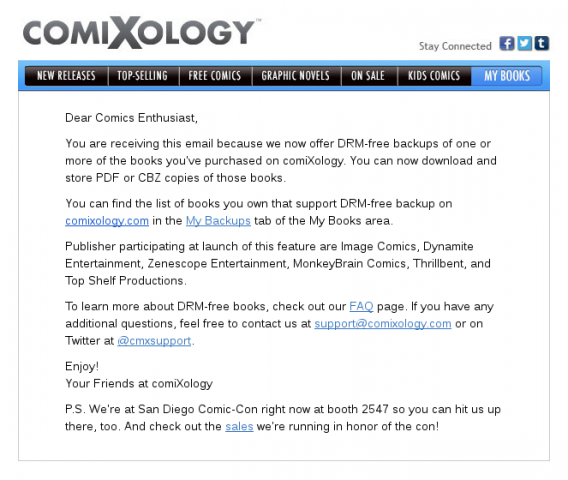 In terms of quality, these backup copies come in the same HD format as those on Comixology’s apps. The only difference will be in how and where you read them. None of these DRM-free copies can be loaded into Comixology’s app, so you’re pretty much on your own there. You also have to do your own housekeeping when it comes to copying them across devices. Finally, you won’t have access to guided view, Comixology’s rather unique feature that gives a bit of cinematic flair to the reading experience. Not exactly showstoppers, especially considering what you’re getting in return.

A number of authors and publishers have started offering their products without DRM and have reported positive results, or at least not negative ones. It is definitely encouraging to see some big comic book publishers embarking on a similar path, but it will still take some time, or maybe even never, before major ones like DC and Marvel follow suit. Comixology fans might be content for now with this limited selection and might even start flocking towards those publishers just because of their new DRM-free stance.