Years ago, you could go more than a day or so without having to plug your phone in to charge. These days as phones get more powerful, and manufacturers choose a slim form over a larger battery, that’s just not the case. But there are certain tricks to make sure that your phone lasts through the whole day. Of course, one of the more popular methods simply doesn’t work.

We’ve all seen that “one cool trick” that can cut down on your iPhone’s battery usage considerably. But one popular trick does nothing at all to help you out. Many guides on preserving battery life often tell you to close your background apps. This consists of double-tapping the home button and swiping up on the apps that you’re not using.

So who says that this trick doesn’t work? The info comes straight from Apple’s senior VP of Software Engineering, Craig Federighi. If there’s one guy who knows what’s going to drain your battery, it’s this guy.

This piece of information came from someone who decided that they wanted to bust or confirm this myth once and for all (since Adam and Jamie are done busting myths, the rest of us have to keep doing so in their place). The person went straight to the top and emailed Tim Cook, Apple’s current CEO to ask about the effect of quitting apps on your battery.

While Tim Cook didn’t send a response, the question was passed along to Craig Federighi, who Cook likely felt was more qualified to answer. His response was short and sweet. You can see it in the email screenshot below. 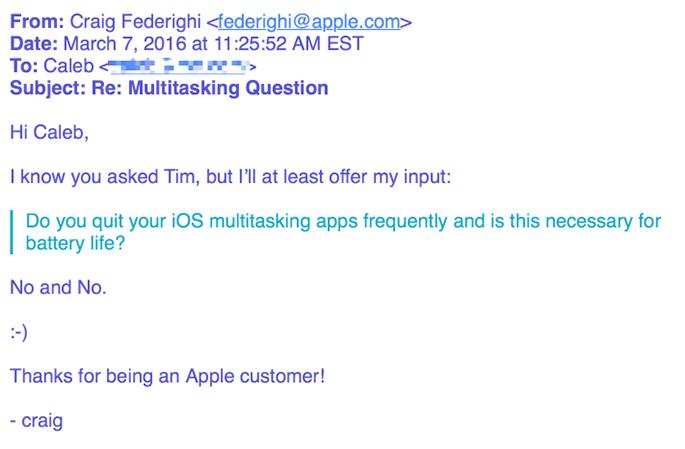 So there you have it. As Jamie and Adam would say, this myth is busted.