Using a bicycle to get around has its advantages: it takes up far less space than a car (and costs less), there’s no monthly fuel charges or insurance premiums, and it burns a bunch of calories. The downside is that it can’t be locked like a car, and so anything you leave on it while you’re in the store is likely to be gone by the time you come back at…including the helmet. Stuffing the helmet into a backpack is one solution, but that is a hassle, especially if you’re heading into a store that doesn’t allow them, and soon the temptation to go without a helmet takes hold.

A helmet that takes up less space is the solution, and now there’s one available: it’s the Fuga from Closca, and it — when fully opened — looks like any other helmet, including what at first glance seems to be a modern design. In reality, though, the design elements are seams between sectioned portions of the helmet. 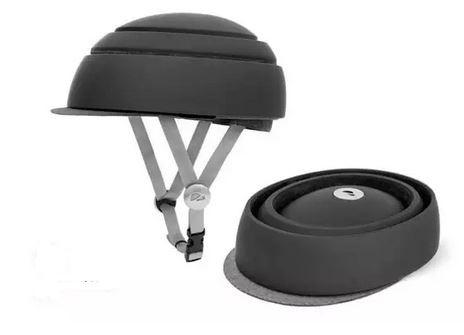 Each section expands to form a full bicycle helmet, but collapse into each other to form smaller, flat helmet “rings” when the device isn’t in use. The helmet could better fit into a shoulder bag, making it easier to carry around on campus or elsewhere without the obvious, intrusive bulk.

The helmet is also certified for use in the United States, Canada, and Europe, being made from polystyrene and polycarbonate that should, by all accounts, protect your skull adequately if you crash. The helmet is up for pre-order at this point for €72, and the shipping is set to start this spring.