Backup remains a guilty chore many people avoid, and yet plenty of us are already carrying around a potential backup device. Most people don’t think of it that way, but your iPod is a huge chunk of storage just waiting to be repurposed as a portable hard-drive. Clickfree sent over their latest easy-backup system, the Transformer for iPod, for SlashGear to take a look at.

When we reviewed the original Transformer back in March, we described it as “getting close to foolproof”. The new Transformer for iPod is similar in setup if not in appearance, a small white plastic dongle with a short USB cord and a USB port on the side. Unlike the Transformer, though, you plug in your iPod or iPhone – using the standard USB cable that comes with the PMP – rather than a normal external hard-drive; the Transformer for iPod then hooks up to your Mac or PC and the Clickfree magic starts. 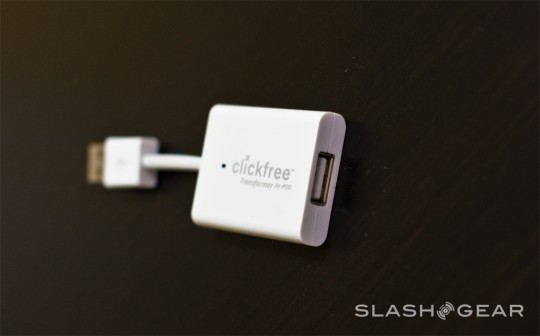 That magic is the company’s homegrown backup software, which is stored on the dongle itself and requires no installation on the host computer. The name of the app is simplicity, and left to its own devices it can manage an entire backup regime with no user input. A countdown timer starts ticking as soon as it boots up, and if left untouched it automatically scans the commonly backed-up directories and files – documents, photos and the like – and shuffles any new or changed data onto the iPod or iPhone’s spare capacity. Clickfree insist that no existing data on your iPod – such as music or video – will be over-written. 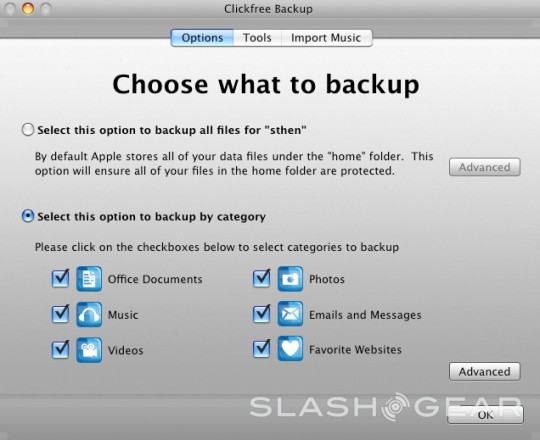 Alternatively, you can select which specific directories are scanned so as to accommodate any non-standard filing structure you may have. Once the Transformer has identified any new or changed files since its last scan, it copies just those over. Obviously your initial backup takes the longest; after that, the speed is proportional to how often you plug in, though as it’s a USB 2.0 connection you won’t see as speedy a transfer as with faster FireWire drives. Still, we didn’t notice much difference between backing up to an iPod and using the original Transformer with a standard USB 2.0 hard-drive.

Where the products differ is in the Transformer for iPod’s new musical abilities. The device also allows you to bring back any music or playlists from your iPhone or iPod to the host computer at a single click, or indeed any iPod you may have to hand. Obviously DRM-encrypted tracks won’t play, unless you can authorize them to the new machine, but standard files will be fine. Should you need to restore your files, that’s a case of interrupting the Transformer for iPod before it starts automatically scanning your system and then choosing which documents you’d like to copy back from a regular explorer interface. 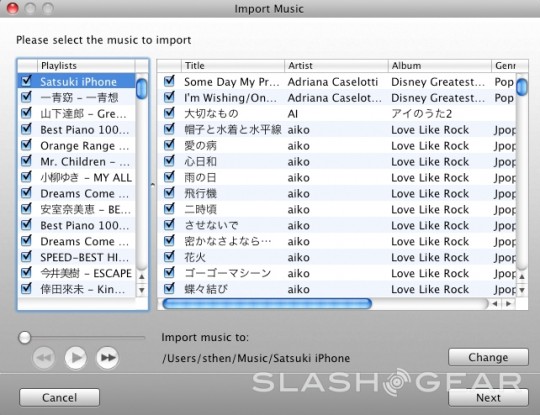 There’s a lot to be said for taking advantage of extra storage capacity that you’re already carrying around with you, especially if you’re using an iPod classic which only the most avid music collectors have likely filled. On smaller capacity devices, however, it’s a balance between usability for the PMP’s core purpose – a portable music device – and the potential for ever-increasing backup sizes. A 4GB iPod nano, for instance, is unlikely to be much of a backup companion for all but the most spartan of off-device storage.

Still, there are plenty of people with a few important documents, bookmarks and photos that they’d like to safeguard, and a chunk of spare iPhone or iPod space crying out to be better used, and for them the Clickfree Transformer for iPod makes perfect sense. At $49.99 it’s reasonably priced, too – $10 cheaper than the original Transformer – though ironically its biggest competitor will be another Clickfree device. Next month, the company will release the Transformer SE, an update to the original model, that for $89.99 includes both iPod/iPhone backup and the ability to use a regular hard-drive. That appeals to our forward-thinking nature, though many users will certainly find the Transformer for iPod sufficient for their everyday backup needs.