Wireless hotspots are relatively commonplace these days, billed as straightforward ways to get all your WiFi devices online without paying a cellular modem subscription for each. The Clear iSpot, then, is an odd fish: while it’s capable of supporting up to eight WiFi clients simultaneously, they’re all meant to be Apple mobile devices like the iPad, iPhone or iPod touch. Have one of those and you can be enjoying 4G speeds for a bargain monthly fee; anything else and – officially – you’re out of luck. Check out the full SlashGear review after the cut.

We said the iSpot’s data package was a bargain, and we weren’t kidding: $25 per month is significantly lower than you’d normally pay for either 3G or 4G mobile data. Clear are also selling the iSpot contract-free, which means once you’ve dropped $99.99 on the hotspot itself there needn’t be any ongoing service fees if you decide not to use it. 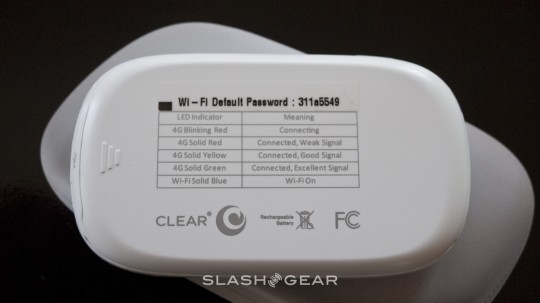 As you might expect, there’s a handful of compromises involved. First off is the Apple device limitation – more on which later – but perhaps equally important is the absence of 3G network support. If you live in an area with 4G coverage the iSpot is great; if you’re not in one of those (currently) limited areas then there’s no falling back onto the 3G network, you simply don’t get any data service whatsoever. That makes it particularly important to check Clear’s coverage maps, though even then there will be dead patches to content with where signal strength varies.

The simplicity of the connectivity adds up to a straightforward chunk of hardware. The iSpot is fatter than a 3G-only MiFi 2200, with two front-panel LEDs for status and a power button on the side. There’s no microSD card reader as we’ve seen on some recent MiFi-style devices, for turning the hotspot into a mobile NAS of sorts, and nor is there a display: anything more complex than WiFi and WiMAX status are relegated to the browser-based control panel.

Inside the iSpot there’s a relatively huge 2,700mAh battery that Clear reckon is good for the usual quoted 4hrs of hotspot service. It charges using a miniUSB AC adapter, and of course since you can access the battery compartment you could feasibly pick up a second pack. Unlike some mobile hotspots you can’t plug the iSpot in via USB and use it as a tethered modem. 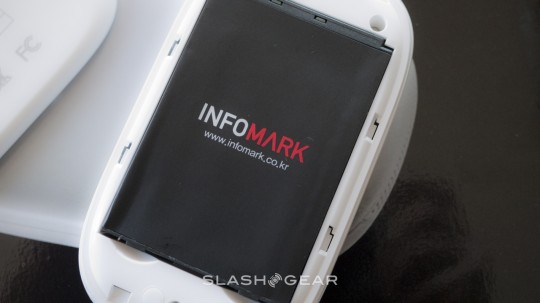 Setup is straightforward, especially if you’re content with the preset SSID and WPA settings. The password is printed on the label on the bottom of the iSpot, but can be changed via the browser interface. As with most routers you can also change WiFi channel (or leave it on automatic) and disable password protection altogether; interestingly, it’s also possible to change the power settings for the WiFi radio. That means you can notch it down in order to maximise battery life, if you know your WiFi devices aren’t going to be too far away. 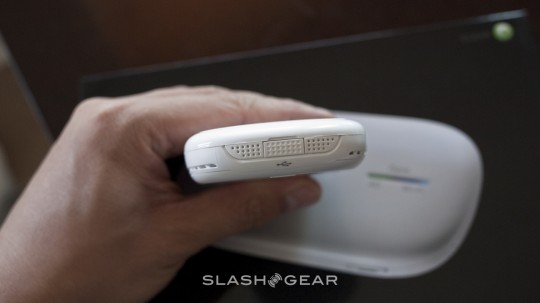 In terms of speed, we tested the iSpot in Lewisville, TX, and saw average download speeds of 4.14Mbps. That’s impressive stuff, though upload rates were a different story; they averaged just 0.28Mbps. For most users, though, that will fit in with their mobile ambitions: only those wanting to upload large amounts of data (which admittedly is unlikely if you’re using an iPad, iPod touch or iPhone) will be frustrated.

Battery life, meanwhile, generally exceeded Clear’s estimates, with our unit managing around 4.25hrs with WiFi taken down to its shortest range setting (still sufficient for a regular room or office, so you can have the iSpot next to the window and still be browsing from the couch). Clear’s use of a miniUSB port for recharging is annoying, given most mobile devices have settled on microUSB, but of course the Apple gadgets it’s intended to play with use their own, proprietary connector.

A cheap source of high-speed mobile connectivity is appealing to more than just iPad, iPod touch and iPhone owners, however, and so it’s unsurprising that hacking the iSpot for broader access is a hot topic. Clear has used MAC filtering to identify what device is trying to connect, blocking anything else. To work around that, you’ll need to figure out how to spoof your notebook/tablet/smartphone’s MAC address; instructions for that are broadly available online, though Clear are unlikely to smile upon anyone caught doing that.

If you’re not comfortable hacking your device, the obvious alternative is Clear’s own Spot 4G – exactly the same unit as the iSpot but without the Apple limitation and in a black casing. Unfortunately, while the Spot 4G is priced at $99.99 too, service plans start from $40 per month and require a contract; in contrast, the iSpot’s data plan is $25 per month and demands no contract.

That makes it a definite bargain, and if you decided not to opt for a 3G iPad or prefer faster connectivity than AT&T’s 3G on your iPhone then the allure of Clear’s WiMAX can’t be denied. With no slower connection to fall back on, the Clear iSpot has limited appeal until the carrier broadens their coverage, but if you’re an occasional mobile data user living in a 4G area and carrying a bag full of Apple mobile hardware then the iSpot is hard to argue with.