Microsoft has just announced the New Surface Pro and if you were expecting something groundbreaking, you probably went home disappointed. Sure, it has its fair share of small upgrades and new features, but even Microsoft itself didn’t call it the Surface Pro 5 probably for that reason. While the new 2-in-1 will remain a sort of reference device, Microsoft has left the door open for other PC makers to try and do one better. It is at this time that Chinese OEM Chuwi is launching its SurBook, whose name is an obvious reference to Microsoft’s Surface line. But while some might consider the timing of the launch ill-fated, given the New Surface Pro reveal, the other side of the coin is that the stars are actually aligning in Chuwi’s favor.

Make no mistake, the Chuwi SurBook is no high-end 2-in-1 computing device. But just as the smartphone market has blurred the boundaries between tiers, so does the SurBook keep its feet in multiple ranges. The biggest drawbacks of this device will be its CPU and its storage type. The latter is sadly eMMC, which doesn’t speak well of read and write speeds.

As for the processor, that’s a latest gen “Apollo Lake” Celeron N3450. It’s no Core, defintely, not even a Core m3, but it is a huge step up from the previous Cherry and Bay Trail Atoms. A Celeron machine would normally be looked down on, but here’s the thing. Almost every new Windows 10 S laptop revealed, save for the Surface Laptop, actually runs on one, which will push the processor line into the spotlight. The Chuwi SurBook, however, offers the full power of a Windows 10 system, not the locked down garden of a Windows 10 S.

Although it has “book” in its name, the Chuwi SurBook actually aims for the Surface Pro in terms of design. You have a similar tablet main form factor and a similar kickstand design. Instead of a keyboard dock, you get a keyboard cover. And iIt isn’t just the design either. The SurBook even has the same display specs as the Surface Pro 4 or the New Surface Pro. That means a 12.3-inch screen with a resolution of 2736×1824. The exact same 267 ppi pixel density and the exact same 3:2 aspect ratio. And like a good Surface Pro competitor, the SurBook totes a pressure sensitive pen. Sure, it only has 1,024 levels of pressure sensitivity, but that’s still plenty.

Of course, there are also a few things that the SurBook does a bit better than even the New Surface Book. While Microsoft remains stubborn in adopting USB-C, Chuwi is giving you a choice. Three in fact. It has one USB-C port but also two USB 3.0 ports. Handy when that lone USB-C is used to charge the 10,000 mAh battery. And unlike the New Surface Pro, both the keyboard and the pen are included in the price tag.

It should be no surprise that the Chuwi SurBook is going to cost more than half of a Surface Pro, be it a 4 or a New. The retail price tag is $473 for 64 GB of eMMC storage and $498 for 128 GB. But here’s the clincher. If you’re fast enough, you can head over to Indiegogo with the link below and get a rather sizable discount. $299 just for the tablet itself (no keyboard or pen), $349 for the 64 GB model and $399 for the 128 GB, both with keyboard and stylus included. The catch is that there are only 200 slots for each.

To be fair, the New Surface Pro wasn’t a complete dud, but it did highlight the need for more players and options in this market segment. Players that are willing to take the device to the other end of the price spectrum while compromising as little as it can and options like the Chuwi SurBook. 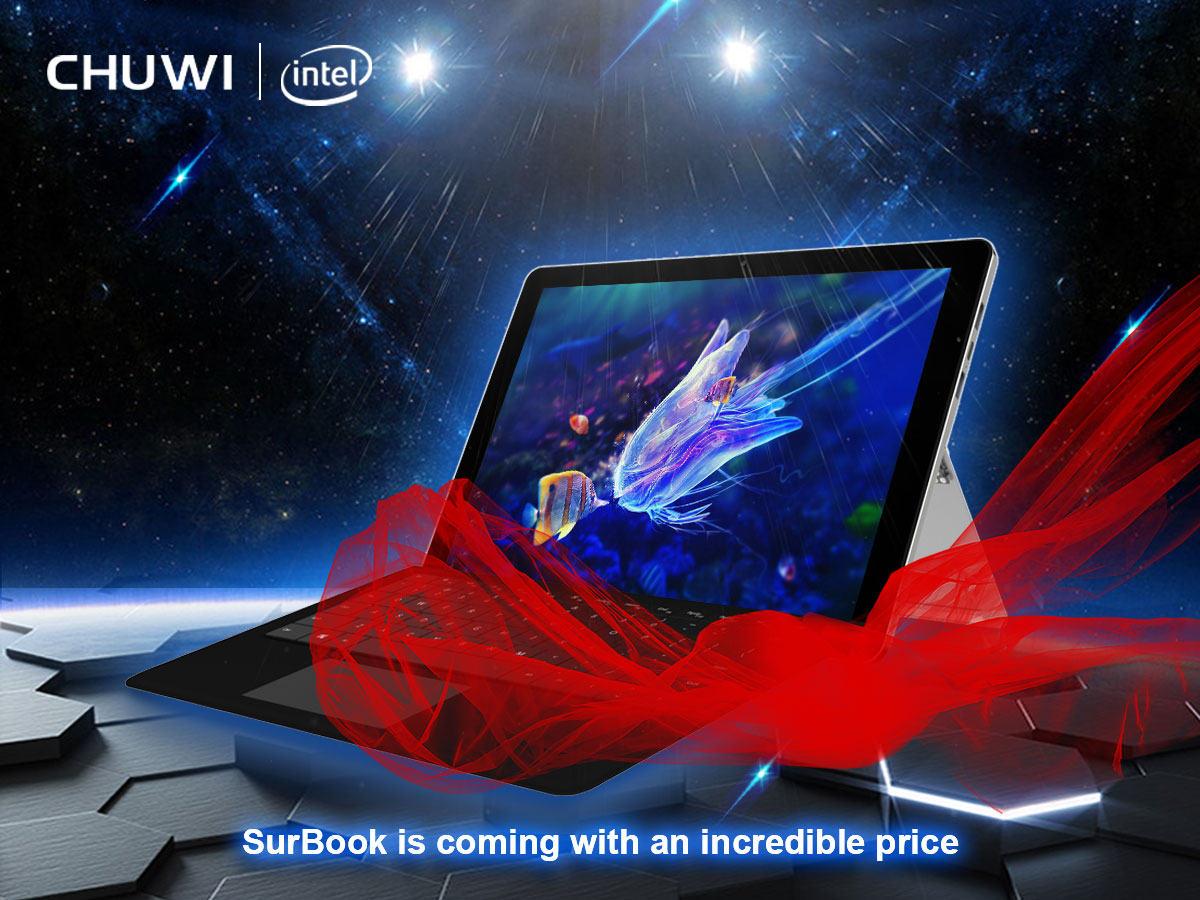