Let this be a lesson, gadgets: no matter how cute you are, you’ll still get the teardown treatment.  Notorious screwdriver-wielders iFixit have coaxed their latest device in front of the camera, and it’s the Chumby One touchscreen WiFi radio/alarm clock/widget display.  The components themselves aren’t too much of a mystery – after all, the Chumby team encourage such acts of hackery and modification – but there are still a few surprises lurking inside.

Said-surprises include a removable WiFi dongle which means you could feasibly sacrifice wireless internet if you needed another hook-up, and an engraved message from Chumby’s founder (who goes by the nickname “bunnie”).  That WiFi dongle supports the a/b/g bands; we’re not sure whether you could replace it with a 3G modem, since that would probably require specific drivers.

There are also some “unpopulated passives” as iFixit describe them, for composite NTSC/PAL TV output, and an FM radio. The OS is stored on a microSD card, and the whole thing is powered by a Freescale i.MX233 CPU with 64MB of RAM.  Plenty more internal shots at iFixit. 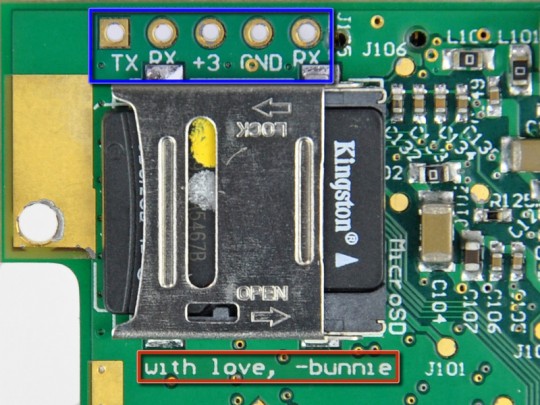