Chromecast is a viable STB replacement, but not for everyone

The Chromecast was arguably one of the most talked-about new products that was revealed by Google earlier this week. The new Nexus 7 and Android 4.3 were cool and all, but the Chromecast definitely got most of the attention, and it’s easy to see why: it’s a media streaming device the size of a dongle, and it only costs $35 ($11 after the 3-month Netflix discount, which has since been discontinued). However, after playing around with it for a little while, I’ve noticed that it’s an awesome device for some people, and an awful device for others.

Perhaps the biggest point that’s being argued over is the lack of streaming options available for the Chromecast. While more and more services will eventually support the new device, only Netflix, YouTube, and Google Play are supported. This is obviously a huge turn-off for those who take advantage of the likes of Hulu, Amazon Instant Video, etc., but for me, the only streaming services I use are Netflix and YouTube (okay, I use Spotify too, but I never use it on a TV anyways). Then again, these other services can be accessed through the Chrome browser and relayed to the Chromecast, so not all hope is lost there.

But the support for Netflix and YouTube means that the Chromecast supports all of the video streaming services that I use, which is a huge win for me, but a huge loss for those who use anything other than these two services. Again, though, the Chromecast SDK will allow more and more streaming services to add support eventually, so the only question is when that will happen. 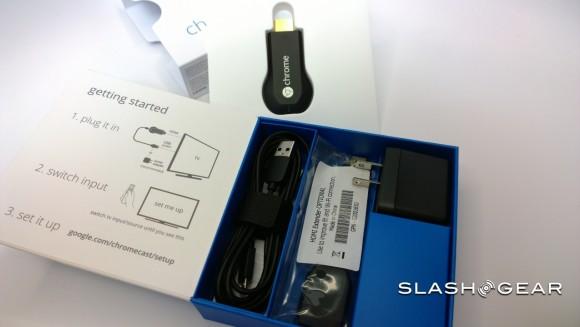 The Chromecast is great for a variety of things, including presentations (just as long as your presentation is through a Chrome browser, which shouldn’t be too hard, thanks to Google Drive’s Presentation app). You can mirror a Chrome tab to the Chromecast, and keep browsing other tabs on your computer while that tab remains on the TV. And yes, if you’re on that active tab, any action you do will be mirrored to the Chromecast, which is great for showing a large crowd something on your computer.

However, a huge complaint that I have after playing around with it for about an hour, is that it’s just not as convenient as a streaming set-top box like an Apple TV or Roku. It’s also harder to use for those who aren’t tech-minded. My wife, for example, found the process of using the Chromecast to be extremely tedious compared to just browsing around on a set-top box using a remote control. She found it was quicker and easier to select the content she wanted on a set-top box rather than using the Chromecast.

However, even though I’m pretty tech savvy, I still found the Chromecast to be a little tedious at times. For example, I love watching episodes of How It’s Made while I fall asleep, and the nice thing I like about set-top boxes is that they’ll automatically play the next episode. Chromecast doesn’t do this. Instead, after a show is over and I want to watch another one, I have to wake my smartphone, and scroll down to the next episode. Sadly, there’s no option of just tapping “Next” in the Netflix app. With that said, it’s simply just easier to use a remote control in this instance.

Obviously, that’s a very specific example of when the Chromecast doesn’t exactly work well, but from an overall perspective, I really like it. It’s extremely portable, so I can take it with me when I travel and use it in hotel rooms to watch my Netflix shows, instead of using my laptop’s small screen and awful speakers. It’s also a great device for parties, especially when you’re all gathered in the living room and you want to show everyone a funny YouTube video. All you have to do is bring it up on your smartphone and beam it the Chromecast to have it start playing on the big screen. 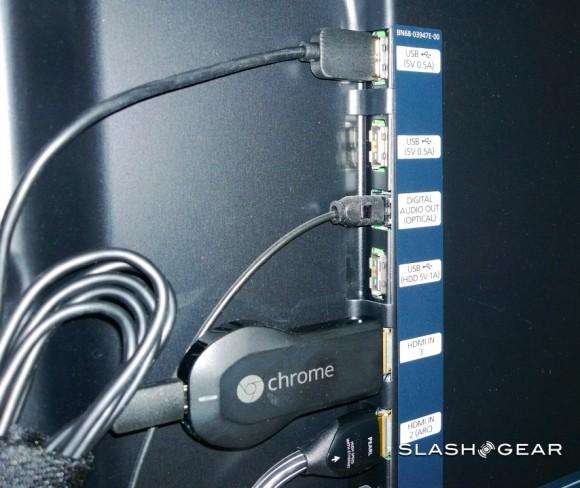 In a broader sense, the only downside is latency. Google already said that gaming is out of the question because of slow latency, and pausing/resuming video, as well as adjusting volume took a second or two to kick in for me. Granted, I was in a room in my apartment that gets really crappy WiFi coverage, so I’m guessing the latency would be a bit better than this in a well-covered area.

As far as the extra USB power cable that everyone keeps complaining about, it’s really not a big deal. Yes, Google was pretty shady in skimming over that bit of information during the announcement, but if you have a USB port on your TV, it’s seriously not a huge problem at all. Even if you have to plug it into an outlet, it’s plug-and-forget.

Obviously, the Chromecast may not be anything too special right now, except for it’s extremely-low price point, but I can only see the device getting better and better as time goes on. Thanks to the accompanying SDK, we should be seeing more and more apps support the Chromecast, and we wouldn’t be surprised if hackers got their hands on it as well and did some really neat stuff with it. And of course, we reckon you’ll be able to grab a Chromecast for next to nothing on eBay once the hype settles.