From the very beginning, Chrome OS and Chromebooks were envisioned to be cloud-centric, which is why the early models had very measly internal storage. It may have been a bit ahead of its time and Chromebook makers eventually crammed more gigabytes inside devices. Fast-forward a few years later, cloud storage has become a critical piece of modern workers’ lives and now Chrome OS is putting them these services to the forefront of its native Files app. That is if their Android app supports its.

Being cloud-based, it has always been possible to access third-party services like OneDrive and Dropbox from Chrome OS via web browsers. It’s a roundabout way to use them, though, as you have to first download the file you’re working on and then re-upload it. Google Drive, naturally, gets preferential treatment and can sit on the Chrome OS Files app as if it were a regular local folder.

About Chromebooks now confirms a tip that it won’t be alone forever. Some users have reported seeing OneDrive in the Files app and the site also saw Box there. These cloud storage services are mounted in the Files app, which you can access them as if they were stored locally on the device. Of course, the speed of access may vary, depending on your Internet connection, 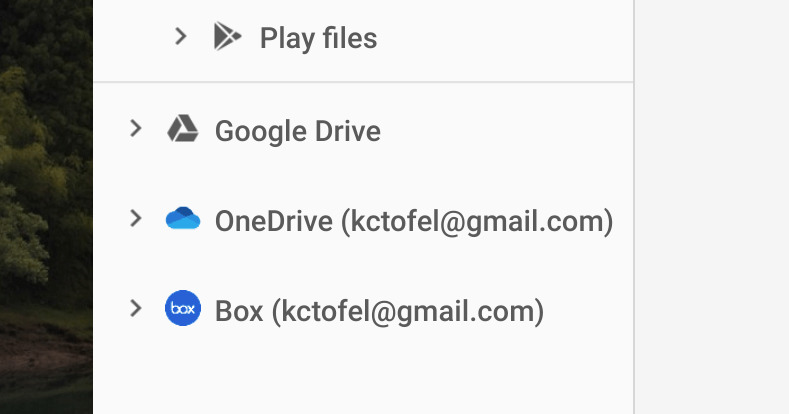 The major caveat to this arrangement is that the service has to have an Android app, which is probably how Chrome OS makes it work. Not only that, it may have to also implement certain API for it to appear in Files. Dropbox, for example, doesn’t.

It may still be a work in progress but it could be available starting Chrome OS v75. Hopefully once the news it out, other services will follow suit to provide Chrome OS users a seamless cloud-centric experience. Just as Google had originally envisioned.