Google is adding fingerprint authentication to Chrome, with the latest beta of the browser able to tap into biometric sensors like Touch ID on Apple’s MacBook Pro. Chrome 70, which was released in the beta channel this week, will allow websites to use fingerprints to authenticate users looking to log-in and more.

It’s part of a couple of updates to the Web Authentication API, which includes more secure ways to make sure the current user is the legitimate one. That process started out all the way back in Chrome 51, but the two credential types introduced there are being joined by greater deployment of a third in Chrome 70. “PublicKeyCredential” was added to the desktop version of Chrome back in version 67, and is now being enabled by default on Android.

With it, web apps will be able to create “strong, cryptographically attested, and application-scoped credentials to strongly authenticate users,” Google says. Each credential is bound to authenticators – the way the user is recognized – so that, for instance, only you get access to your messaging or shopping accounts. 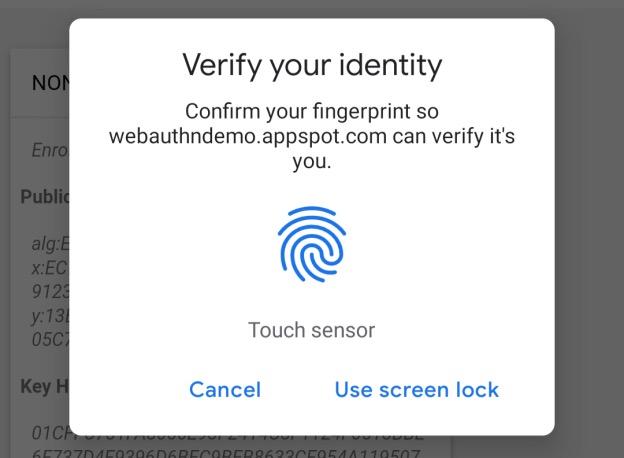 One of those authenticators could be fingerprint recognition, now, too. Chrome 70 enables macOS’ Touch ID sensor by default, along with any fingerprint sensor available on an Android device. Developers of web apps will therefore be able to request a user’s fingerprint in order to confirm their identity.

Considering just how much of what we do each day on a computer actually takes place in the browser, the addition of fingerprint scanning in Chrome is a significant one. It’s not just Google that’s working on this, mind. The technology Chrome 70 is using is based on WebAuthn, a new API and web standard that allows security devices to be integrated with website authentication.

That’s not just limited to Touch ID, either, and could one day include services like Face ID too. So far, Apple hasn’t publicly disclosed its work integrating WebAuthn with Safari, its own browser, though it’s hard to imagine the company isn’t developing that.

As for Chrome 70, the new version also adds the Shape Detection API, which allows a device to use its shape-detection capabilities on online images. It will allow Chrome to spot faces, barcodes (including QR codes), and text in images, without relying on a library.