Remember back when Harmonix revealed that they’d be hiring for a first-person shooter back in August of 2012? It’s time! Harmonix‘ developers have brought the world the likes of Guitar Hero and Rock Band, and this week they’ve revealed a title that should once again pave new ground in the gaming industry.

This game will be free-to-play via Steam, and will be ready to roll sooner than later for the PC. While at the moment it seems that this Music-As-Weaponry game will be exploding forth on the PC alone, their Alpha Testing sign-up suggests they’re aiming for SteamOS and Mac in the future as well.

At the moment any gameplay you’re seeing of Chroma out there in the wild will be Alpha. The Alpha will be coming quick for Steam users and is available for sign-up right now through their Alpha Testing portal. This game will be available for Alpha testing in a Closed manner – those chosen will also have to be OK with losing data from time to time. 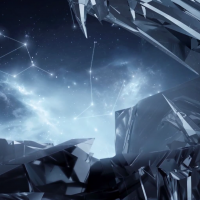 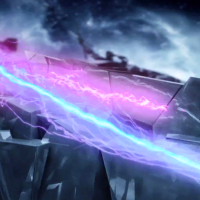 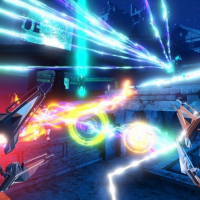 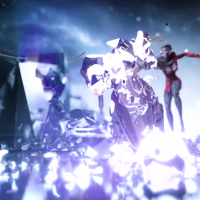 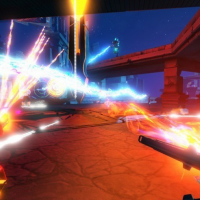 Above you’ll see several screens from the game as it exists in Alpha – gameplay and cinematic bits. This game will roll out with five classes for some multiplayer PvP action: hard point capture, cart push, and other natural elements are in play.

Where this game gets interesting is in the music that’s playing while you’re firing your gun. There’s music in the background that you’ll want to match when you’re firing or jumping. Jump on a down-beat and you’ll jump in a much more epic manner. Shots fired on-cue are much more effective than those shot at random times.

This game will likely be released inside 2014, but other than that we’ve not got but a clue. Alpha testing has already begun – we’re going to jump on in as soon as possible. Stay tuned and keep your head – and trigger finger – tapping to the beat!