A team of Chinese researchers has conducted an experiment that is nicknamed the “Chinese artificial sun” using the Experimental Advanced Superconducting Tokamak (EAST) fusion device. The EAST device has been conducting a four-month-long experiment with the goal of seeing how hot the electron temperature inside the fusion device could be. The scientists were able to achieve an electron temperature in the core plasma of over 100 million degrees.

Power injection in the experiment exceeded 10MW, and the plasma stored energy was boosted to 300 kJ after the team optimized the coupling of the different heating techniques along with using an advanced plasma control system and theory/simulation prediction. Experiments on plasma equilibrium and instability along with confinement and transport, plasma-wall interaction, and energetic particle physics were demonstrated. 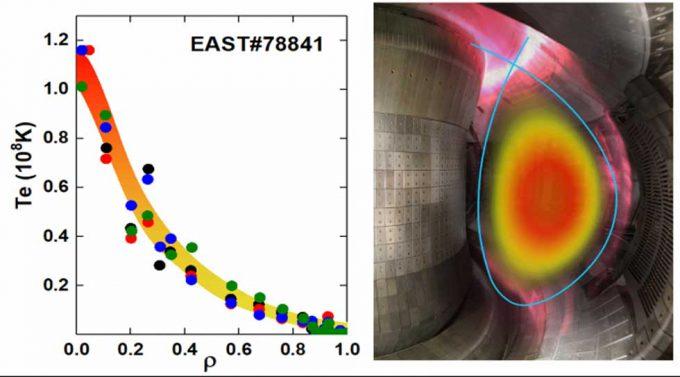 The team says that it was able to achieve fully non-inductive steady-state scenario with high confinement, high density, and high energy confinement enhanced factor during test operations. One key in this experiment was the team’s work to resolve particle and power exhaust, something it says is critical for high-performance steady state operation.

The results of these tests have given the scientists key data for validation of heat exhaust, transport, and current drive models. Researchers are focusing on optimizing the third-evolution fusion machine with large radium at 7 m, minor radium at 2 m, toroidal magnet field at 6.5-7 Tesla, and a plasma current of 13MA. A team based in the US is currently working on new magnets that they believe could help to increase power output in their fusion experiment.