China’s “Long March to the Moon” has placed a lander and a rover on the moon. The Chang’e-3 lander and her accompanying Yutu or “Jade Rabbit” rover arrived inside the right eye of the “Man in the Moon” this evening at 9:00PM Beijing time. This marks the first time in more than 40 years anyone has performed a soft lunar landing. All sources point to a successful deployment for the robot visitors.

The Chang’e-3 lander launched from the surface of Earth about two weeks ago. Its payload included an array of instruments for gathering data about the moon and the surrounding spacescape, including an ultraviolet telescope for stargazing. Upon lunar approach, the lander tilted, threw on the reverse thrusters, and set itself down without incident. The hatch opened and out rolled Jade Rabbit.

The rover is a six-wheeled, solar-powered, 260-pound vehicle equipped with a variety of sensors. It will explore a three-mile radius around the lander. It will use radar, an alpha particle X-ray spectrometer and an infrared spectrometer to peek 30 feet deep inside the moon’s crust to look for mine-able minerals. Jade Rabbit will take vacation pictures and video for the duration. The lander and the rover (artist rendering above) are expected to snap buddy pics of each other tomorrow, Sunday. 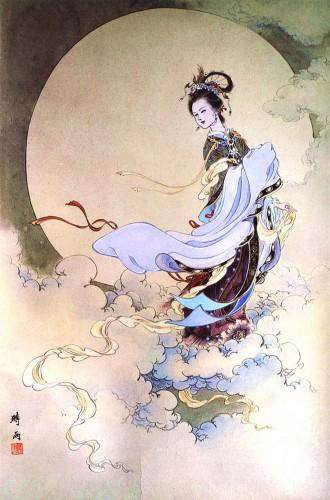 Chang’e is the name of a goddess who flew to the moon in Chinese mythology, and Jade Rabbit is Chang’e’s moon pet. In an interesting bit of spacefaring lore, NASA points out that Buzz Aldrin mentioned the goddess over the comm to Houston during the first human moon landing in 1969: “Okay. We’ll keep a close eye out for the bunny girl.”

The BBC reports that the Jade Rabbit moniker was chosen in a poll of 3.4 million participants. The success of this landing is a grand feather in the nation’s cap: the only two countries ever to have put a rover on the moon are the US and the former USSR.