If Apple has its way, your entire home will someday be Siri-enabled. Between its various hardware options like the iPhone, Apple Watch and (soon) HomePod, the underlying software that is HomeKit can make your entire home controllable via voice. For many of us, the garage is a daily use portal, which makes it ripe for disruption via Siri. The underlying question is whether or not that’s even a good idea. Instead of wondering, we decided to find out using Chamberlain’s new MyQ Home Bridge.

The first thing you’ll need is a garage door opener (obviously). We opted for the 3/4 horsepower MyQ Belt Drive with battery backup. Powerful enough for a standard garage door made of aluminum, our installer tells us it would easily be able to handle any standard 2-car garage door (some are made of heavier materials, but common doors are aluminum or a similarly lightweight material).

The belt drive keeps things remarkably quiet. A room situated directly above the garage door is fairly undisturbed by the opener itself. Two sensors mounted on either side of the door inside the garage watch for objects in the way, and it has a nice safety feature that recoils a closing door if it hits something. In testing, it was sensitive enough to hit my shoulder without causing any injury, but I definitely don’t suggest you stand under a closing garage door or tell the kids to play ‘chicken’ with it.

The MyQ bridge is relatively small at about the size of two iPhone Pluses side-by-side (it’s much thicker, but that’s the square dimension). It mounts directly to your wall in the garage via two screws, and needs little more than a power outlet and WiFi signal. Your garage likely has a ceiling outlet for the garage door, and the MyQ bridge can simply tap right into the free outlet there. 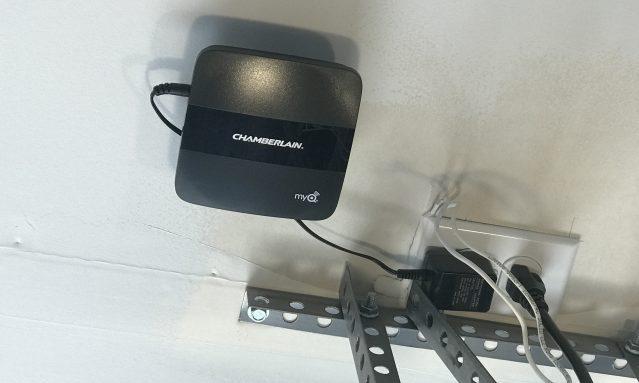 We had the garage door opener itself professionally installed, and I’d suggest you do the same. I won’t bore you with the details, but there’s a lot of science regarding leverage that goes into a garage door opener installation I didn’t even consider. Had I tried to do it myself, there’s a good chance I’d have ripped the door off its tracks.

The MyQ installation is conceptually dead simple. All you have to do is plug it in and open the accompanying Chamberlain app. It finds the MyQ bridge, and offers to sync it with HomeKit. From there, you simply have to pair the actual opener with the bridge by pressing a button on the opener itself, and you’re up and running.

In my instance, things didn’t go so smoothly. The bridge would hang endlessly while trying to link to HomeKit, or simply time-out and give up. Chamberlain was incredibly responsive to my issue, but the fix is exhaustive. With 25-steps to remedy my problem, it was a dizzying loop of holding buttons down and powering things on and off. It wasn’t hard. It just wasn’t seamless. It seems my situation is unique – and Chamberlain was great throughout the process – so no real demerits there. 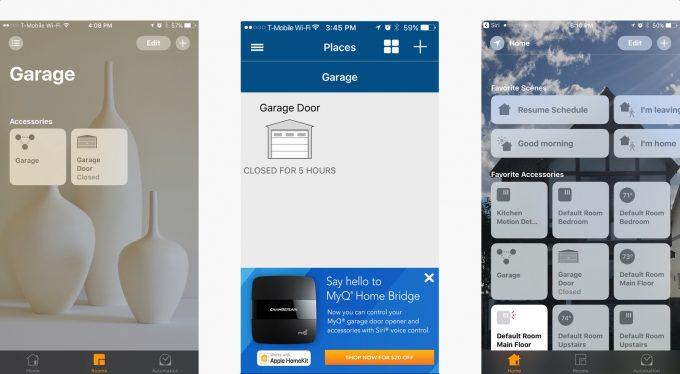 Simply barking the command to open my garage door while driving is interesting, and quite honestly superfluous. There’s nothing stopping me from pointing a finger to the sky, pressing the button on the garage door opener clipped to my visor, and accomplishing the very same thing I’m asking Siri to do. The real win is that I can open it from anywhere, while the garage door opener remote requires line-of-sight.

Siri demands that I unlock my iPhone before it will adjudicate my command, so it’s not quite as “hands-free” as I’d like. As iPhone X seems to come with Face ID facial unlocking, this concern vanishes, and I’ll be left controlling my garage door via voice commands only. It’s an exciting proposition.

One of the things we tend to overlook when it comes to the connected home is automation. With the MyQ Home Bridge, a simple “Hey Siri, good morning” or “Hey Siri, I’m leaving for work” could automatically open the door for you in addition to other tasks. Similarly, you can have it automatically open or close depending on your location, which makes hands-free operation a bit more immediate if you know you want it to do something like open when you’re in the vicinity.

If I have one annoyance, it’s the beeping. To remain UL compliant, the door opener emits a long series of beeps about ten seconds before and all during your door closing when using Siri or the app. You can’t toggle it off, either. This only happens when you close it remotely, but it’s something I wish I could disable. 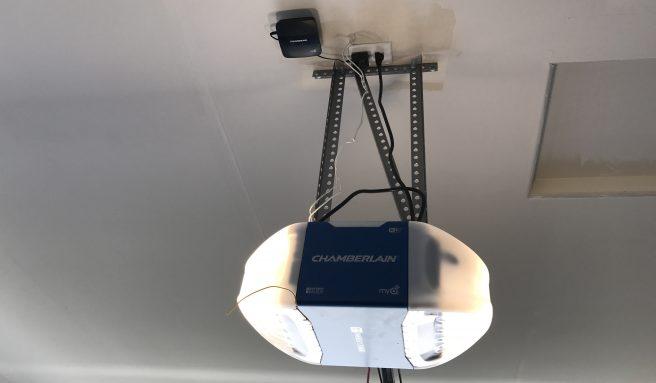 The MyQ home Bridge is still a bridge, and Apple would much rather our homes not be full of those. Instead, it wants HomeKit devices to be controlled directly, which I get: it’s one less communication hurdle, one less possible point of failure, and one less chance for latency to annoy users.

Siri compatibility is fun. I think Siri is perhaps most useful while driving, when voice commands become a matter of safety. This is one small step towards a more hands-off technical driving experience, and I enjoy it.

Until garage door openers have HomeKit functionality built right in, the MyQ Home Bridge will do just fine. It’s not obtrusive, and I haven’t noticed any hiccups in communication since I successfully installed and synced it. At $49.99 ($69.99 after its introductory phase), it’s an easy add-on for your garage door opener purchase.