Say what you will about webOS and its ultimate demise, but one thing you can’t deny is that its multitasking solution is still the best on any mobile device to this day. If you want to be able to relive the glory days of the Palm Pre and its multitasking finesse, then CardSwitcher for iOS 4 and 5 is just the thing you need. It’s a jailbreak tweak that aims to add the ease of webOS multitasking to iOS devices.

Installing it is relatively simple: all the necessary components will be downloaded, then you’re ready to go. Double-clicking the home button will bring up a familiar Card interface, presenting a live-view of currently running apps. Gestures also allow you to flick cards away, closing the running app. If you don’t fancy swiping up, then there’s a “close” button option that can be enabled and disabled too.

There’s also a grid layout that will present you with the four most recently opened apps, although if you have more open you can scroll through the list. It’s similar to Apple’s current implementation, but with a better view of exactly of what’s open in the backgrounded apps. 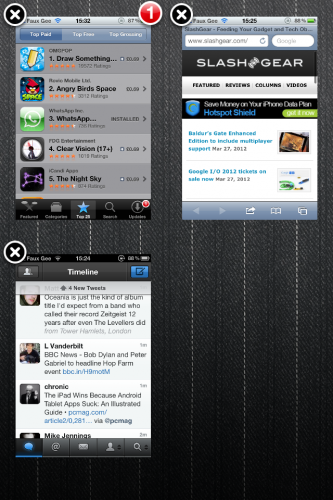 We went hands-on with CardSwitcher, and have to say, it works beautifully. It’s not quite the same as native webOS multitasking, which included other features like card stacking, but it’s close enough. On an iPhone 4S, all graphical transitions were smooth and fluid, and we didn’t see any immediate bugs.

CardSwitcher 2.0 is available on Cydia right now, and will set you back $1.99.