An age-old tale of a big cat roaming the English countryside has found some rather convincing evidence pointing toward the existence of a real animal, a Canadian Lynx to be exact. This speciment had been sitting in the basement of Bristol Museum and Art Gallery since it had been added there in February 1903 and mis-labeled, according to Science World Report, a Eurasian lynx – this species having been extinct since the 7th century. The re-appearance of this mammal suggests firsts that the rumors of a big cat in England were true, and second that the cat certainly wasn’t born there.

This animal was rediscovered in 2012 and a study was published this past month in the journal Historical Biology. The official report was released this week through the University of Southampton where they make clear that this mammal is now the earliest example of what’s called an “alien big cat” being at large in extended bits of Britain. 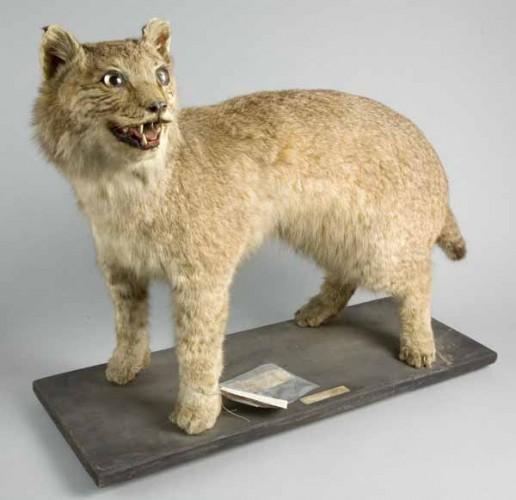 The research team workin on the study of this being suggest that their findings will add to evidence taking apart the idea that the 1976 Wild Animals Act allowed a generation of wild cats to enter the British countryside. The Canadian lynx discovered here suggests that the trend in bringing exotic animals in to the country as pets existed well before the 1976 Act was introduced.

“This Edwardian feral lynx provides concrete evidence that although rare, exotic felids have occasionally been part of British fauna for more than a century. The animal remains are significant in representing the first historic big cat from Britain.” – Barnett

The studies done in-laboratory on this wild cat suggest that it’d been in captivity for an extended period of time – long enough to have severe tooth loss caged up. Durham University research team member Dr Greger Larson spoke up as well.

“Every few years there is another claim that big cats are living wild in Britain, but none of these claims have been substantiated. It seems that big cats are to England what the Loch Ness Monster is to Scotland.

By applying a robust scientific methodology, this study conclusively demonstrates that at least one big cat did roam Britain as early as the Edwardian era, and suggests that additional claims need to be subjected to this level of scrutiny.” – Larson

Those of the public that wish to get a glimpse of this Lock Ness Lynx, as they might call it, will do well to head over to the Bristol museum soon. The cat is set to remain on public display for the forseeable future.