Can charging my phone under my pillow cause a fire?

Today we’re going to have a chat about the various different places where charging your smartphone can cause a fire. Spoiler alert: fires can happen almost anywhere there’s oxygen, and the vast majority of the time there’s a fire involving a smartphone, it’s due to shoddy equipment. Not only can your phone start on fire, your bed, your pillow, and your head can start on fire, too.

Will charging under my pillow start a fire?

Yes. Charging your phone under your pillow at night is a risk. It absolutely can start a fire, and not just because your phone won’t have anywhere to dispel excess heat. In general, your phone, laptop, or most other small electronics will shut themselves off before they get hot enough to start a fire. Despite this, you should always keep the various air vents in your devices open and free to dispel heat. The hotter your device gets, the better chance it’ll shut down completely and potentially destroy your onboard data, photos, etcetera. 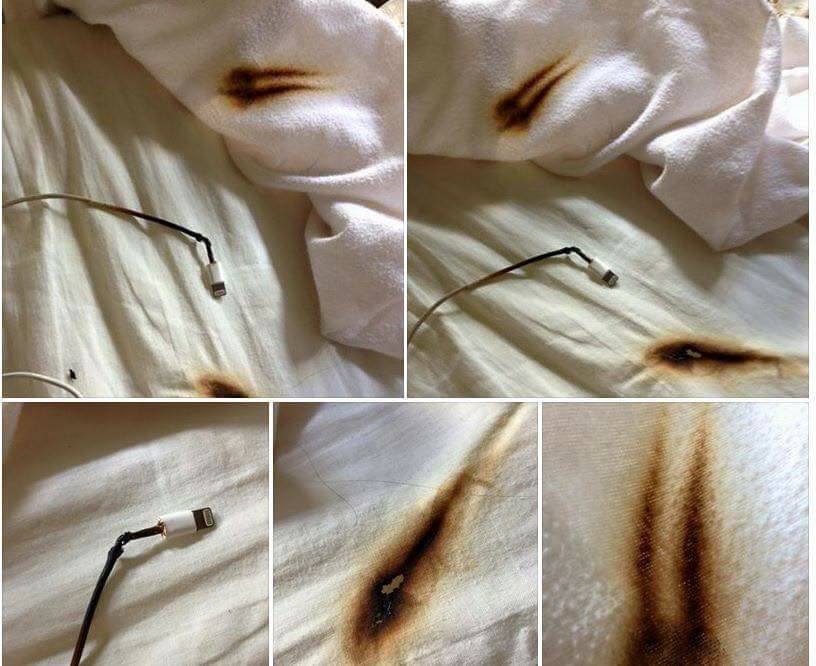 If you’ll take a peek at a grid of images above, you’ll find images shared by the Newton NH Fire Department. They’ve suggested that the fire in these photos was started by the phone (not pictured), which is possible. It’s far more likely that the damage here was caused by the faulty power cord.

A power cord has three layers. There’s a rubbery exterior (sometimes there’s an extra layer of material, if you’ve got a fancy cord), then an (often brightly colored) protective layer surrounding and protecting the final layer. The final layer is copper, the material through which power flows from your wall socket to your phone.

As you’ll see in the images above, the wire is clearly damaged. The most likely situation here was that the power cord was damaged before the fire, and an exposed copper wire (or even a twisted bit of cord therein) caused a power surge.

Your smartphone has a power regulator that’s able to dictate the amount of power that flows into the device’s battery. There’s another power regulator at the other end of the cord – back at the point at which you’ve plugged your cord into the wall. Modern power cords and power regulators are pretty smart. When they get damaged, they get pretty dumb, really quick.

When your various power plugs and cords get damaged, they stop sending the right amount of power to the right place at the right time. When that happens, there’s a significant chance that abnormal amounts of heat will appear, at which point flammable materials have the potential to light up.

Power cords and wall plugs are a GOOD PLACE to NOT buy 3rd-hand off-brand goods. If you absolutely must purchase a power cord from a brand you’ve never heard of because you’re at an airport, get a better cord as soon as possible. Airport cords aren’t necessarily safe just because you bought them from a person face-to-face.

The companies with the most to lose make the most reliable cords and power plugs. That means the smartphone company, like Apple, Samsung, LG, Sony, HTC, etcetera, is the absolute best place to go to get a replacement cord for the phone that needs a cord.

This holiday season (and beyond) remember to keep your phone, tablet, etcetera charging out and away from your bed. NEVER let a device charge its battery under a pillow, and don’t leave a device charging on a stack of old newspapers either – fire is as fire does!