One of the coolest cars that Mercedes offers is the Mercedes-AMG GT R Roadster. It’s the open-top sibling to the coupe version of the car and is already very attractive and fast right out of the box. What’s interesting about the Roadster is that it’s an extremely limited-edition car with only 750 units produced globally. A company called Bussink has taken that car and hacked off the roof and most of the windshield to create something called the Bussink GT R Speedlegend.

The car is fitted with something dubbed a “Speedbow” running from the hood to the rear of the car, creating a sort of rollover protection that looks very interesting and reminds more than a little of the halos on current F1 cars. It reminds us of the protective halo on the racing cars because that’s exactly what inspired it. The builder says the car is meant to emulate the roofless SLR Stirling Moss.

The bow has all the lights and sensors inside that were eliminated when the standard top and windshield were removed. The design requires the entire convertible top to be removed along with the A-pillars. The windows and windshield are shortened, and the surgery eliminates 220 pounds and lowers the center of gravity of the car.

The builder also adds styled louvers along with body-color painted carbon fiber all around the car. Bussink also tweaks the engine under the hood, increasing output to 850 horsepower, a significant improvement from the 577 horsepower the car has from the factory. The engine modifications are optional. 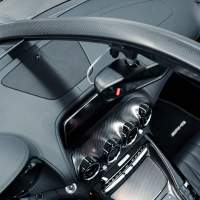 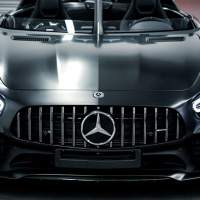 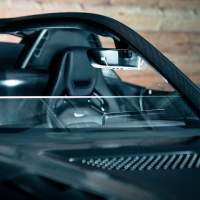 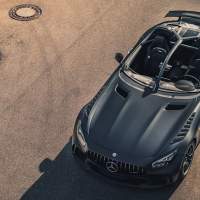 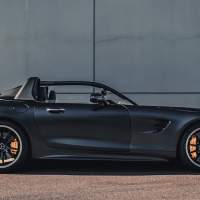 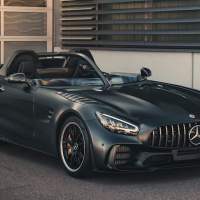 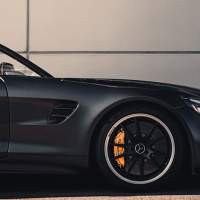 The car can also be optioned with the AMG GT R Pro front end. Each car also comes with a helmet color-matched to the paint color because no one wants to be driving around at high speeds in a car that offers no protection for the face. Several other interior modifications are available as an option. Pricing is a mystery, but consider the stock Roadster starts at around $190,000.