Bugs in space: No, the ISS isn’t “brimming” with bacteria

Several reports today suggested that the International Space Station (ISS) was straight up packed full of bugs – but here are the facts. A study was done using samples from 8 locations throughout the ISS over the course of 14 months, starting on May 15th, 2015, ending on May 6th, 2016. This study was conducted largely because of the “upcoming new era of human expansion in the universe, such as future space travel to Mars” by recommendation of the National Research Council (NRC) Decadal Survey.

Where did they test? 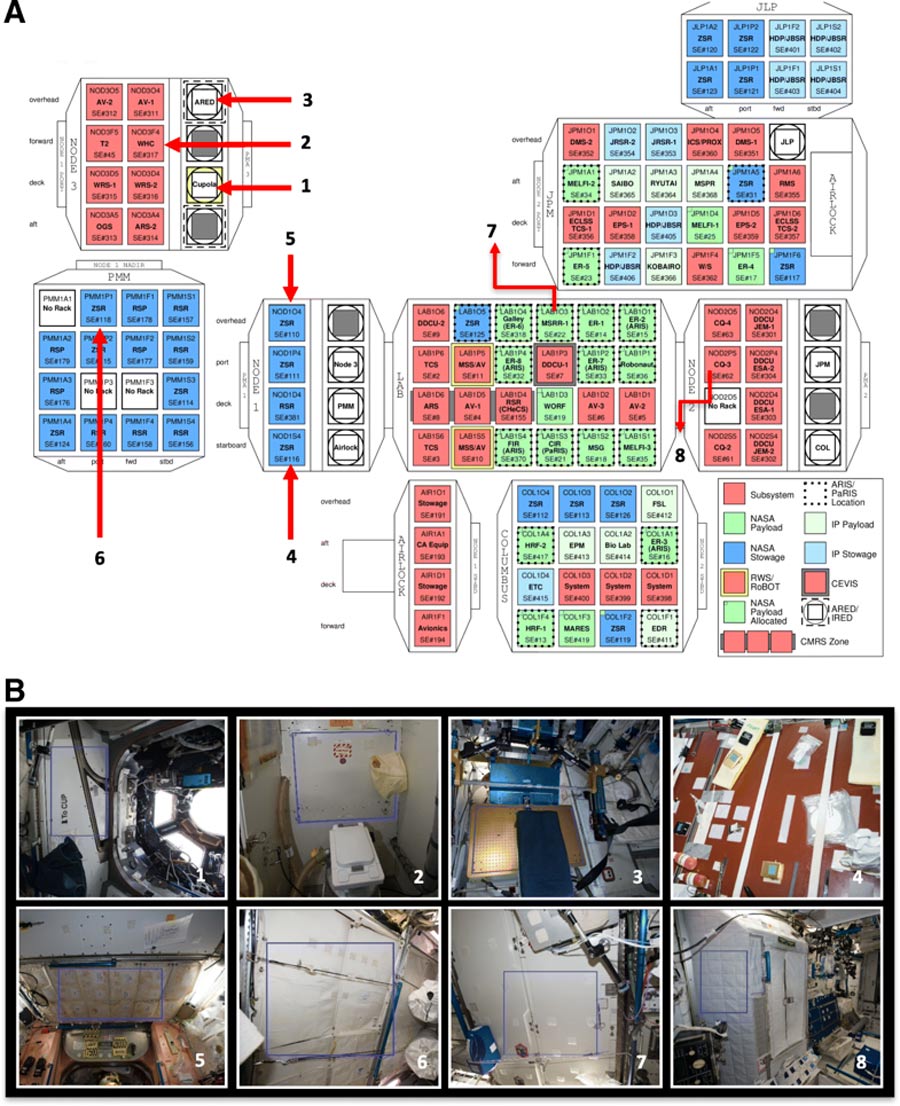 Each of the eight locations were outlined in blue in the image above, also known as Figure 1. A shows a schematic of the US module of the ISS with its “various nodes and modules.” B shows photos of each location sampled (with said blue boxes.)

What did they find?

They found a bunch of bacteria and fungal samples with which they’ll be able to test and prepare for in the near future. The average number of bacteria and fungi found at each location were similar – in fact “there were no statistically significant differences in the average bacterial load across the eight locations.”

The report also showed that “there were no statistically significant differences in fungal load over time.” In total, they found “133 bacterial isolates and 81 fungal isolates” identified by Sanger sequencing. That’s a total of bacterial and fungal types that “grew” – which meant they were viable, aka not dead.

Several studies were carried out relatively recently on the microbiological cleanliness of the ISS. These studies were done using samples from the US nodes and Japanese Kibo module – but did not measure the intact/viable microbiome. Those studies also only studied samples from air filters and debris collected from vacuum cleaner bags.

They found that the ISS was not significantly more full of microorganisms than a hospital or office here on Earth. They used the Hospital Microbiome Project and the Office Succession Study to compare. Still, if they want an environment as clean as possible, they’ve got some work to do.

Is there a danger to astronauts?

Not at the moment. There’s still a chance that what’s been found COULD turn into something dangerous for astronauts of the future. As mentioned in a study back in November of 2018, ISS microbes still need to be monitored. As it is with most studies of this sort, this is only one part of the puzzle.

They’ve already begun employing new antibacterial surface coating in the time since the samples from this most recent study were taken. There’s a pretty fair chance that, like most studies published in the manner in which we’re seeing this study published, scientists are already deep in the work of solving problems that’ve yet to rear their ugly head.